Munster head coach Anthony Foley has predicted further improvement for his side, but admitted that change was not happening “as quickly as we’d like”.

After a patchy start to the season, Munster have found better form in recent weeks, winning their last three Pro12 games – including a memorable 34-23 win over Leinster – and their opening two Champions Cup games.

Speaking to RTÉ Sport after his side secured a 28-24 win over Cardiff Blues that had at times looked unlikely, Foley said that although Munster had improved, there was still work to be done.

“As I said to the boys inside, we’re not in the performance business, we’re in the result business. The wins that we’ve gotten since Zebre I think have propelled us up the table and given us a certain position in Europe, but that’s all it is at the moment.”

He said he foresaw improvement in Munster’s standards, but suggested that he had been a little surprised at the pace of improvement.

“I think, as a young coaching group, we’re finding that things don’t happen as quickly as we’d like. It’s just about being patient, and change will happen eventually.”

Reflecting on win over the Blues, Foley was less than impressed with his side’s performance levels but lauded their commitment and passion.

“It was one of those ones where you hang in there,” he said of the game. “You’re not playing particularly well, there’s a lot of things going wrong.

"The boys functioned, I thought, below standard today. But you can’t disregard commitment and heart and attitude.

“They stuck at their task. It wasn’t pretty at times, but we got into the right area of the pitch when it counted and Paddy [Butler] did well to score that try.”

"The boys functioned, I thought, below standard today"

Foley hailed the contribution of Munster’s British and Irish Cup players, who have won three of their last four games in that competition and who came in the first team in the absence of players unavailable through international duty or injury.

“That was the backbone of that side out there,” he said, “and they stood up and they gave us four points.” 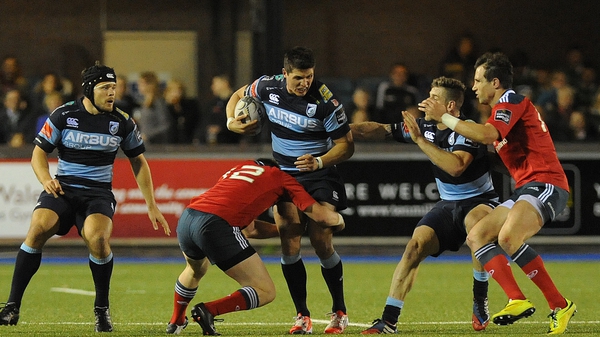