A late Paddy Butler try and the kicking of JJ Hanrahan was enough for Munster to secure a 28-24 Pro12 win over Cardiff Blues.

Flanker Butler went over for the score which broke Cardiff hearts in the 78th minute after the home side seemed to have clinched a narrow win with prop Adam Jones putting in a commanding performance including a drop goal attempt.

Munster opened the scoring when they earned a penalty for a ruck offence which was slotted from 35 yards by outside half JJ Hanrahan.

A penalty for full-back Rhys Patchell levelled matters before Hanrahan landed a 45-yard effort to restore the lead for the visitors.

Tighthead prop Jones had been told to up his workrate in the loose if he wants to regain his Wales place and he certainly seemed to have taken the message on board as he charged round the pitch.

Munster number eight Robin Copeland was back at the ground where he made his breakthrough at the top level.

He was a key source of lineout ball and also looked to enjoy some of the barnstorming charges which once made him an Arms Park favourite.

The exchange of penalties continued, Patchell from in front after a Munster offside while coming in from the side of a ruck gave Hanrahan another successful kick.

A couple more ruck offences made it 15-9 to Munster as Hanrahan and Patchell traded kicks.

Just before half-time the Blues finally broke the kicking deadlock. Number eight Manoa Vasawai was able to collect a kick and shrug off a couple of tacklers, scrum-half Lloyd Williams burst quickly round the fringes, Patchell was up with play to time his pass perfectly for Argentinian wing Lucas Amorosino to race to the corner for a try on his debut.

Patchell missed the touchline conversion but Hanrahan maintained his perfect record with a sixth penalty to give Munster an 18-14 lead at the break.

Jones continued to have a fine game and was influential as the Cardiff eight turned over the Munster scrum and then earned a stream of scrum penalties. But the Munster defence held firm and there was no yellow card.

In the end, that forward pressure had to tell and midway through the second half Vosawai burst off the base of a five yard scrum with the power to scramble over the line for a try converted by Gareth Davies as the Blues took the lead for the first time.

Hanrahan equalised, but with a penalty already awarded, Jones went for an ambitious drop goal which fell just a few feet short. It got the biggest cheer of the night, though Davies did add the three points from the resulting penalty kick. 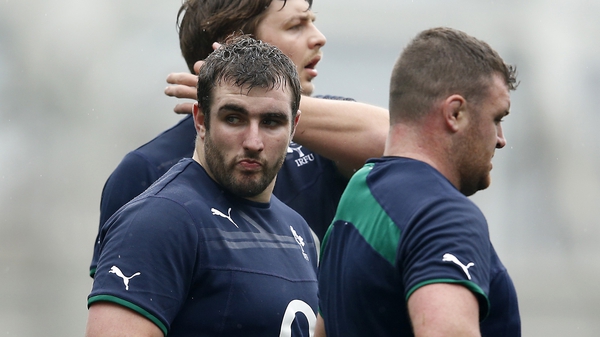 Cronin ruled out of Ireland internationals