Joe Schmidt has denied influencing provincial selection, rubbishing suggestions he has "blocked" Darren Cave's path back to the Ireland squad.

Head coach Schmidt confirmed Robbie Henshaw and Jared Payne would fight it out for Ireland's no 13 shirt in the upcoming November internationals.

Cave last year claimed his "face doesn't fit" with the Ireland set-up, while Eoin Griffin left Connacht for London Irish in the summer, frustrated by his lack of national chances.

Schmidt insisted he is monitoring the progress of both centres, but blasted the "massive misnomer" that he orders provincial coaches to select players in positions of his choosing.

"Paddy's only played one full game this season. He needs to be playing at the moment - he doesn't need to be training with us" - Schmidt

"We've probably gone with Robbie Henshaw and Jared Payne: they are the two guys who are playing 13," said Schmidt, speaking at the launch of a new Guinness advertising campaign in Dublin.

"I think there has been a massive misnomer that I influence provincial selection.

"That is absolutely untrue: the guys that are selected in the centre, or to carry water, are nothing to do with my selections.

"They are the provincial coaches, they are looking to do their best for the province and that's the way it should be.

"For someone to imply that Darren Cave has been blocked is wrong: he's very much on our radar. Darren Cave had a shoulder operation; he's come back from injury, then had a rib injury.

"But he's still a guy that's still in our thinking for 13.

"To say that Eoin Griffin may have left because he saw the writing on the wall is massively disappointing: he is still on our radar, we keep an eye on what's happening at London Irish.

"It's frustrating, because selection is a tough enough job without the impression we're influencing things. We have a very hands-off approach: we try not to interfere.

"We have a lot of faith in what they are delivering, and we benefit from the product of their efforts."

"Paddy's only played one full game this season," said Schmidt, who opted for Munster's Ian Keatley ahead of Jackson.

"He needs to be playing at the moment - he doesn't need to be training with us. He's obviously disappointed, but he's a tough young man, we've got a lot of respect for Paddy.

"Ian Keatley did very, very well on the summer's Emerging Ireland tour, the feedback was that he led by example, both on and off the field.

"This camp gives us a little bit of an opportunity to work with him and help him to develop him as a player."

New Zealand Under-21 cap Payne steps up to Ireland's senior squad for the first time after completing his three-year residency requirements at UIster.

The 29-year-old will face stiff competition from Connacht's 21-year-old powerhouse Henshaw, who remains favourite to start alongside Gordon D'Arcy this autumn.

"Jared has good variety in his kicking game, and his ability to read defensively at tackle time is good," said former Leinster coach Schmidt.

"He can carry and slip tackles, or at least win the gain-line, and I think you could just about say ditto for Robbie. He's also got a very good kicking game.

"His passing game I think is a super aspect to his game, Robbie, he's got a very good width and a really flat, wide pass - and the ability to make the subtle passes as well." 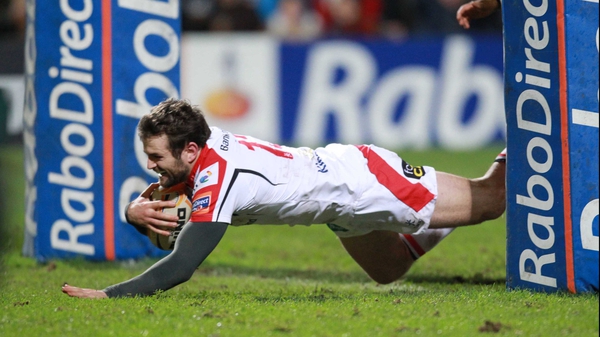 Jared Payne one of five new players in Ireland squad