Connacht coach Pat Lam admitted his side's 24-24 draw felt like a defeat after they blew a 14-point lead in the final quarter against Cardiff in the PRO12 last night.

The Westerners were 24-10 ahead after second-half tries from Kieran Marmion and Nathan White but a converted try from Macauley Cook brought the Welsh side back into it before Sam Hobbs was controversially adjudged to have touched down by the Television Match Official (TMO) with two minutes to go.

Connacht appeared to have foregone some kickable penalty opportunities in pursuit of a bonus point before they were hauled back.

"It’s one where we let some points go,” Lam told RTÉ Sport.

“We’re pretty disappointed. With the previous games [this season] we’ve fought pretty hard and held out but that last play at the end maybe we shouldn’t even have been in that situation to let the TMO make a decision.

“All in all it’s a disappointed team."

"Maybe we shouldn’t even have been in that situation to let the TMO make a decision." - Pat Lam

Lam said that he was happy with his team's improved showing after going in level, 10-10, at the break but that issues in the lineout had cost them dearly.

“We made a few adjustments, talked about the things we could do as a team and came out really strong. To get to 24-10 with 20 minutes to go, things were looking good.

“Then we just started to make a few errors again, we had issues with our lineout, which had a knock-on effect.

“When they scored their try I knew it was going to be tough because Cardiff are a team that has enough quality to hang in there if you give them the opportunity.

“And we certainly gave them those chances in those last 10 minutes."

The Kiwi lamented the fact that the visitors managed 32 phases of attack before scoring the crucial try.

“Thirty-two phases is terrible for a defence," he said. "When you’re defending for that [long] either the quality of the tackle is not good or the decision-making around the breakdown is not good and that’s what we pride ourselves on as a defence. That’s a bad statistic for us as a defence.“

Despite the disappointment of last night's result, Connacht remain high in the PRO12 standings and lie in fourth position, with Leinster and Munster, who play tonight, two and three points behind respectively. 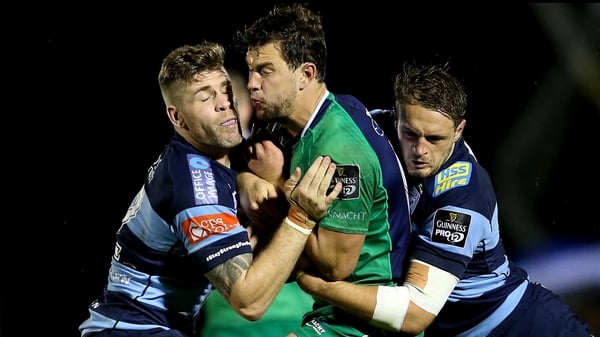 Connacht denied at the death by Cardiff