Connacht had to settle for a share of the points against Cardiff Blues in the Sportsground after a controversial converted 78th-minute try from Sam Hobbs handed the visitors a draw.

It was a marginal call by TMO Dermot Moloney as he ruled that Hobbs successfully grounded the ball against the left-hand post following a mammoth 32 attacking phases from the Blues.

Replays suggested that Connacht captain John Muldoon had got his body in the way as the prop stretched out but the try was awarded and Rhys Patchell converted to draw Cardiff level for a final time.

It was a desperately disappointing finish for Connacht, who had started the second half like a train with two rapid tries from Kieran Marmion and Nathan White.

Man-of-the-match Craig Ronaldson brilliantly converted both to give the hosts a commanding 24-10 lead but the Westerners' inexperience told as they allowed Cardiff to claw their way back thanks to touchdowns from Macauley Cook and replacement prop Hobbs.

It was level-pegging at half-time - 10-10 - after Adam Thomas and Ireland international Robbie Henshaw had swapped tries and Patchell matched Ronaldson's five-point kicking haul.

Deft hands from Danie Poolman released Willie Faloon for an early break and the flanker got his hands on the ball again before Ronaldson left-footed Connacht into a sixth-minute lead.

A slashing break by Lewis Jones should have resulted in a Cardiff try but he was stopped just short of the hosts' line and Cook fumbled the next pass.

The Blues - winless since round 1 of the Guinness Pro 12 - coughed up some soft penalties but they pressurised Connacht into lineout errors and a Patchell-led break-out gained the territory for their opening score.

Cardiff used scrum possession to attack in midfield before quick ball released full-back Adam Thomas to punish brittle Connacht defending just to the right of the posts. Patchell converted for a 7-3 lead with 20 minutes gone.

Connacht were on the back foot until their superior scrum won them a penalty on the half hour and a decision to go for the corner paid off.

The resulting maul was stopped but the quick-witted Henshaw - despite being tackled by Cook - managed to stretch for the line and score.

Moloney confirmed their was no double-movement and Ronaldson added the conversion. However, a long-range Patchell penalty somehow wobbled its way over to equalise by the interval.

Pat Lam's men kicked for territory on the resumption and it paid immediate dividends. Faloon linked with Marmion off the side of a maul and the wily scrum-half stepped off his right to beat Dan Fish's attempted tackle and crash over in the right corner.

Ronaldson's curling conversion added further momentum to Connacht's charge in wet conditions, and he repeated the trick from the same touchline minutes later.

The Blues leaked a third try when a training-ground move at a lineout saw Michael Kearney tap down to Quinn Roux and he fed onrushing prop White, who squeezed over by the right corner flag.

Connacht failed to profit from a couple of close-in set pieces and their bonus-point push never really materialised. Muldoon was unable to stop his opposite-number Cook from burrowing over for a seven-pointer at the other end.

That score provided a lifeline for Mark Hammett's charges, their renewed energy leading to Hobbs' effort from a close range drive.

Patchell's conversion kick wiped out Connacht's lead before the shell-shocked hosts had an ambitious drop-goal attempt blocked in the dying seconds. 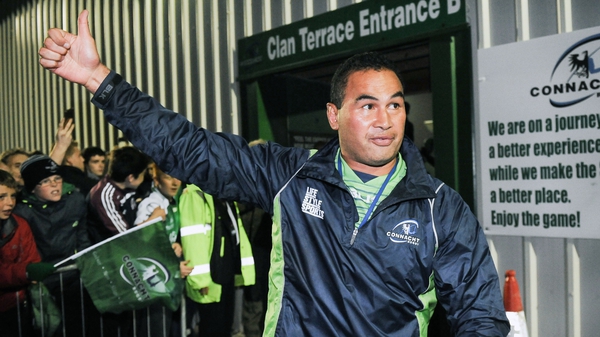