The pair outshone their Munster counterparts, first-time captain Conor Murray and Ian Keatley, with the visiting pack also getting a very good return from their scrum.

Biggar was unerring with the boot, landing four penalties and converting Jeff Hassler's 15th-minute try, while scrum-half Webb's influence as a distributor and tactician saw him deservedly win the man of the match award.

A Keatley penalty edged the hosts in front but they failed to profit from Rynier Bernardo's sin-binning.

Instead, Keatley had to cancel out a Biggar penalty and two more sure-footed strikes from the Ospreys fly-half steered the PRO12 leaders to their fourth straight win.

Munster pressed early on but got no change from 12 attacking phases and full-back Dan Evans' superb kick out of his 22 gained Ospreys some valuable territory.

However, Munster's solid set-piece game launched them downfield again and after the forwards battered up to the try-line, Keatley swung a peach of a pass out for returning winger Van den Heever to score in the left corner.

The try went unconverted and Ospreys were not long in replying, with flanker Justin Tipuric, who was involved twice in the attack, popping a beautiful pass for Hassler to go over unopposed out wide on the right.

Biggar nailed the difficult conversion and despite losing the influential Tipuric to a head injury in the 25th minute, the Welsh region continued to carry the bigger ball-carrying threat with Biggar and Webb lively throughout.

Munster were finding some joy on Van den Heever's wing and the South African was hauled down short during a promising break, while a block by Josh Matavesi ruled out a second try for Hassler.

A line-out infringement allowed Biggar to fire a 46-metre penalty through the uprights, before Keatley responded before the interval when punishing Dan Baker for taking out Murray at a ruck.

As the drizzle came down for the start of the second half, Keatley drilled an early penalty over to move Munster ahead for the second time.

The hosts looked to have gained a key advantage when Bernardo was guilty of pulling down a Munster line-out in the 47th minute, but Keatley disappointed with a poor strike off the kicking tee.

Biggar and Keatley exchanged penalties as Ospreys coped well with their sudden numerical disadvantage, and the home crowd's sense of frustration grew.

As Munster's scrum began to buckle, Van den Heever was pinged for holding on in the tackle and another accurate kick from Biggar put his side into a 14-13 lead.

Ospreys' control of the breakdown was particularly evident as they set up another scoring chance for Biggar in the 69th minute and he delivered once again.

Some clever tactical kicking from Biggar and Webb kept Ospreys in the right areas of the pitch and although CJ Stander and replacement Jack O'Donoghue sparked a furious late rally from Munster, they could not avoid a second defeat of the season at Thomond Park. 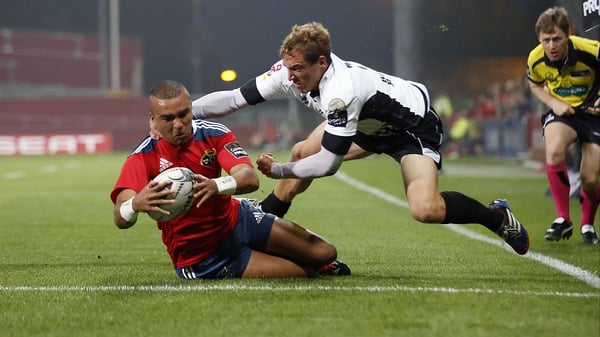