A Simon Zebo first half hat trick of tries fired Munster to a 31-5 bonus point win over Zebre in their Guinness PRO12 clash at Thomond Park.

Munster ran in five tries in all, with Australian Andrew Smith and replacement Dave Kilcoyne also crossing the whitewash in the second half, as new head coach Anthony Foley recorded his first home win.

The home side, who had lost an unprecedented three successive home games in the PRO12 prior to kick-off, laid the foundation for this crucial victory in the opening half with winger Zebo scoring his three tries inside the opening 35 minutes.

After a lacklustre opening period in which both defences held the upper-hand, Munster finally took the lead on 13 minutes.

From a scrum just outside the Zebre 22, Munster moved the ball left and Johnny Holland's skip pass created the space for new centre Smith to put Zebo over in the corner.

Out-half Holland, making his first senior start for the province, was forced off with an injury at the end of the first quarter and replaced by JJ Hanrahan.

Munster doubled their lead on 30 minutes. Winger Ronan O'Mahony created the opening when he made a fine break inside the Zebre half after collecting Conor Murray's box kick. Possession was quickly recycled and Zebo scampered over.

Zebre did have a chance to open their account soon after, but Kelly Haimona's penalty attempt from inside his own half dropped short of the uprights.

After 36 minutes Zebo bagged his third try - scoring only the fifth first half hat-trick in PRO12 history - when capitalising on Hanrahan's break from well inside his own half to touch down under the posts. Hanrahan duly added the conversion.

Munster maintained their 17-0 lead up to the break and in truth, only the final margin of victory remained in doubt at the change of ends.

Ireland international Zebo turned provider two minutes into the second half when he set up former Brumbies star Smith for the bonus point score.

Munster, boosted by the return of international stars Paul O'Connell and Conor Murray to their starting line-up, crossed for their fifth try in the 63rd minute through replacement prop Kilcoyne.

Zebre did manage a consolation try in the closing minute when number eight Samuela Vunisa pounced on a cross-field kick to score.

Greater tests lie ahead for Munster with a home game against the Ospreys and an away tie with Leinster to come over the next two weekends. However, this victory will provide a boost in confidence ahead of those encounters. 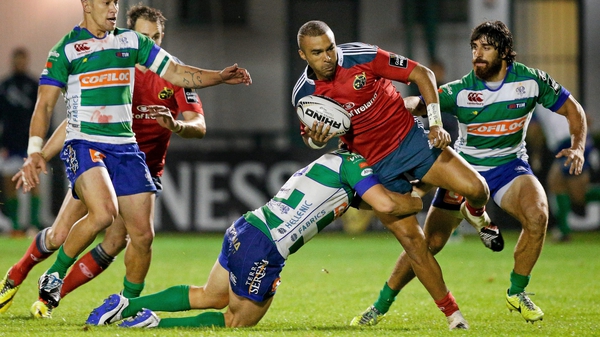