Dan Carter hopes to make his return to provincial rugby on 28 September with an eye to working his way back to fitness in time for New Zealand's third Bledisloe Cup clash with Australia next month, the fly-half said on Wednesday.

Carter has not played since breaking his leg in the Super Rugby final on 2 August and had initially hoped to be back in time for the last two Rugby Championship clashes in Argentina and South Africa.

All Blacks coach Steve Hansen told reporters on Sunday that he hoped Carter would be back playing for Canterbury next week but the 100-cap out-half said that was optimistic.

"It is all going to plan. We knew it was going to take six weeks for the bone to heal and last weekend was the six-week mark," the 32-year-old told Fairfax Media in Christchurch.

"That was the first real, sort of uncontrolled, rugby training I have had today and I got through it with no discomfort."

"It is all going to plan. We knew it was going to take six weeks for the bone to heal"

The All Blacks have already retained the Bledisloe Cup after drawing against Australia in Sydney last month before recording a thumping victory over the Wallabies a week later.

Carter has not played a test for the All Blacks since winning his 100th cap against England last November, after which he took a six-month sabbatical.

He played for the Canterbury Crusaders in their final three Super Rugby regular season games and in the semi-final before breaking his leg early in the final against the New South Wales Waratahs.

His return to rugby was carefully managed by the All Blacks and he said the decision to return to the field in provincial rugby was the right one.

"Not playing a lot of rugby this year, it just made sense to come back and play [at provincial] level rather than be rushed into international level," he added. 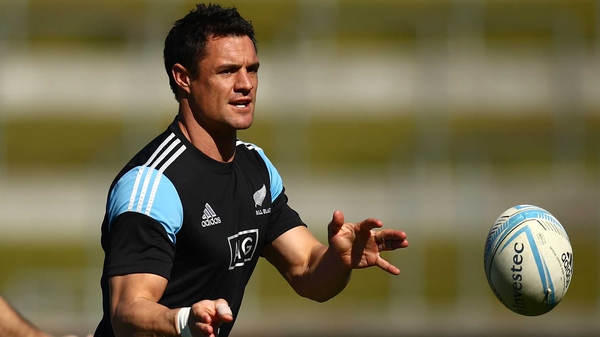