A rampant first-half performance from Glasgow Warriors inspired a 54-0 victory over Zebre and secured the Scots their first-ever home berth for a play-off semi-final, against Munster.

Glasgow, who finished second in the RaboDirect PRO12 table, can now look forward to hosting third-placed Munster at Scotstoun next Friday.

Zebre lacked conviction and ended up bottom of the league and surpassed by fellow Italians Treviso.

Glasgow got off to the perfect start with a try from Stuart Hogg inside 47 seconds. Further tries, from Ryan Grant, Al Kellock and Hogg, saw the bonus point achieved before 20 minutes had passed.

Alex Dunbar and Nikola Matawalu added tries before the break and, with Duncan Weir converting all but one, Glasgow led 40-0 at the turn.

In much different conditions Glasgow scored two second-half tries through Geoff Cross and Matawalu with Weir converting the first and Ruaridh Jackson the second.

Glasgow made the perfect start with a try within a minute of the start by full-back Hogg.

Winger Sean Lamont, making his first outing since he was injured in March while playing for Scotland, started the move up the right from where possession was transferred left, with Hogg coming into the line and breaking two weak tackles to touch down.

The next two tries came from similar positions. A penalty was kicked to touch close to the Zebre line producing a Glasgow line-out.

On the first occasion number eight Leone Nakarawa produced one of his basketball passes to find prop Grant, who touched down.

Secondly, captain Kellock seized the throw-in and dropped over the line, with the score awarded after the television official ruled out blocking.

Glasgow's fourth try, and the quickest bonus-point try of the Pro12 season, arrived in the 19th minute.

With stand-off Weir having succeeded with three out of four conversion attempts, Glasgow led 26-0.

It was one-way traffic and two further tries allowed the home side go in at the break leading 40-0.

On 28 minutes Hogg found Alex Barr with a long pass on the halfway line and the centre shrugged off two tacklers to run in for the score.

Hogg was deprived of his hat-trick by Matawalu three minutes later. The full-back had put a long hack ahead to the posts but his winger beat him to the touchdown.

Zebre conjured up their one scoring chance in the 31st minute, but TV evidence showed that lock Quintin Geldenhuys had grounded the ball just short.

By the time the second half kicked off the lovely spring evening had turned into a downpour and the nature of the match changed.

Although Glasgow remained parked in the Zebre half, the game's third quarter passed without a score being registered.

Glasgow's next try arrived in the 66th minute. Replacement prop Cross burrowed over for Weir to kick a good conversion.

Then, with four minutes left, Matawalu broke through just outside the Zebre ’22 to score under the posts with substitute number 10 Jackson converting. 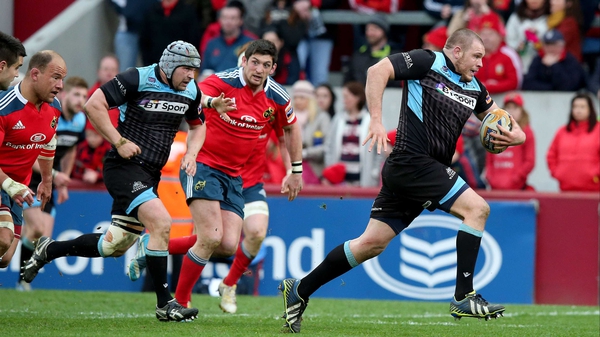