Connacht’s RaboDirect PRO12 season finished on a low note as Ospreys a bonus point in beating the Westerners 45-20.

Connacht started the brighter and earned a penalty from a scrum on the 22 which Miah Nikora kicked to give the Irishmen the lead after four minutes.

But the Ospreys still managed to dig deep for a performance to score six tries to Connacht's three, which were scored by Darragh Leader, Denis Buckley and Conor Gilsenan. The result means Connacht finish the season in tenth spot.

The match had become all but irrelevant after the Ospreys' disastrous 30-27 defeat to Zebre on 2 May.

Ian Evans was playing his final match for the Ospreys before moving to Toulon in the summer.

And Justin Tipuric was playing his final game before undergoing shoulder surgery which will sideline him for Wales' tour of South Africa next month.

Despite the defeat to Zebre, Ospreys made only two changes with wing Jeff Hassler and flanker Sam Lewis coming into the side for Aisea Natoga and James King respectively.

The Ospreys squandered a try chance on 10 minutes in a mix-up between Tipuric and Hassler.

But Hassler more than made up for the error three minutes last when he picked up a loose ball in his own half and ran in breaking through a last-ditch tackle to go over for his team's first score.

But Connacht were back in the lead five minutes later when wing Danie Poolman latched onto Nikora's neat cross kick and he put full-back Leader in.

In a see-saw battle Ospreys came from behind once more as Beck went over for the second try to begin a sequence of 17 unanswered points.

After Dan Biggar landed a penalty skipper Alun Wyn Jones went over by the posts as the Ospreys opened up a 24-8 lead.

But on the stroke of half time prop Buckley was on the end of a driven line-out to claim Connacht's second try.

Seven minutes into the second half Beck went over to secure the bonus point.

And there were further tries for prop Nicky Smith and Dan Baker as Ospreys emerged six tries to three winners. Flanker Gilsenan went over for Connacht's third try. 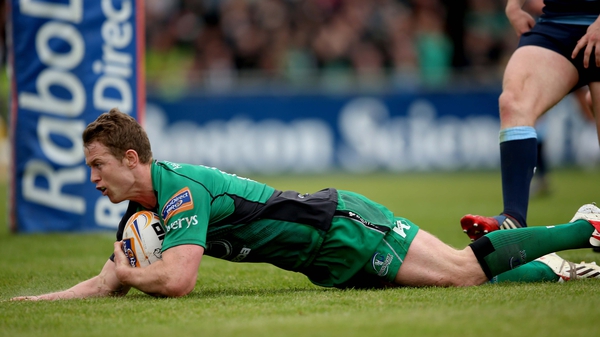