Connacht’s last home game of the season ended in disappointing fashion after Cardiff came from behind to win their RaboDirect PRO12 game 22-15 at the Sportsground.

The Welsh region profited from a penalty try and two touchdowns from Lewis Jones and Dan Fish as they completed a fine comeback for their fourth straight RaboDirect PRO12 win.

It was disappointing finish for departing backs Gavin Duffy, Dan Parks, Frank Murphy and Eoin Griffin who were making their final home appearances for Connacht.

Matt Healy's converted try, set up by Connacht Players' Player of the Year Kieran Marmion, was the difference between the sides at half-time as the hosts led 10-3.

Robbie Henshaw's 45th-minute try widened the margin to 12 points, but two tries in the space of three minutes - the penalty try and an opportunist 59th minute effort from Jones - completely changed the complexion of the game.

Gareth Davies added both conversion to edge the Blues in front and Fish was fed for the final try after Connacht lock Aly Muldowney was sin-binned.

Cardiff threatened in loose play early on with Alex Cuthbert and Josh Navidi standing out, and the visitors' Gethin Jenkins-led scrum also laid down a marker.

Connacht could have gone ahead in the 11th minute but full-back Darragh Leader watched his monster penalty attempt come back off the right-hand post.

The westerners continued to improve and Miah Nikora got them off the mark in the 22nd minute, before they used scrum possession to set up Healy's try four minutes later.

Eoin McKeon linked with scrumhalf Marmion who drew in a couple of defenders and his well-weighted grubber kick in behind bounced up for winger Healy to run in his fifth try of the league campaign.

Nikora added the conversion and the province's captain John Muldoon almost crashed over from a quick tap - instead, he was whistled up for a double movement.

Cardiff forced a couple of penalties closing in on the interval and Davies, on his 50th Blues appearance, was called upon to slot the second of them through the uprights.

Connacht resumed in fine fettle, prop Rodney Ah You nearly plunging over for an early try after an excellent high catch by Leader.

Cardiff were unable to hold the hosts at bay as a well-timed pick and go from Henshaw at a close-in ruck saw Connacht move 15-3 clear.

The Welshmen refused to panic, using their forward power to get them back into scoring range and a penalty try - awarded as Jenkins continued to dominate Ah You in the scrum - was converted by Davies.

Indeed, Connacht endured a disastrous three-minute spell as a bouncing ball evaded the retreating Denis Buckley and Cardiff hacked through for replacement scrum half Jones to dot down.

Davies' conversion put the visitors in front for the first time at 17-15 and Connacht, with Parks and Duffy now on the pitch, needed a lift heading into the final quarter.

But their hopes crumbled as Muldowney saw yellow for pulling down a maul and after a smashing drive from the Blues pack, the ball was spread wide for full-back Fish to score.

Replacement Simon Humberstone missed the conversion and was also off target with a late penalty, but it was not needed as Cardiff celebrated their first Irish victory since overcoming Munster in Cork in January 2013. 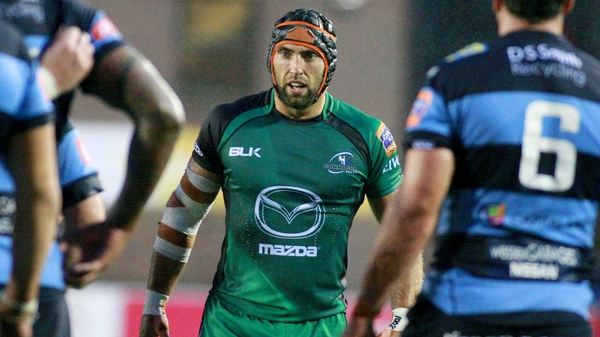