James Downey believes Munster's proud Heineken Cup history can be an important factor in their bid to reach a fifth European final on Sunday.

Munster head to the Stade Vélodrome in Marseille, where an appointment with Jonny Wilkinson's Heineken Cup holders Toulon awaits.

Wilkinson and company will start as favourites, but Munster showed during their quarter-final demolition of Toulon's fellow French heavyweights Toulouse that they mean business this season.

"The tradition and history is there, and it's what the club is renowned for," Munster centre Downey said.

"The players come into the club knowing that - they know about Munster from the Heineken Cup."

Munster won the tournament in 2006 and 2008, while they were also runners-up on two occasions, but Downey added: "You want to create your own legacy as well.

"It is a young team coming through and they want to make their own stamp now. They'd like to have their own bit of history.

"The lads put their heads down and really pick things up in a Heineken Cup week. It's a competition where we do produce big performances.

"The (RaboDirect) Pro12 is your bread and butter and it's what you do day in and day out, but the big crowds and the big games are always in the Heineken.

"It is the hype you get that you wouldn't normally get in the Rabo. The Heineken Cup is the Champions League (of rugby) and you want to be playing there."

Munster bowed out at the semi-final stage last season against Clermont Auvergne, and Downey said: "We realised in the dressing room afterwards that we had let it slip.

"We had a great chance to beat Clermont, and we said to ourselves that we had to remember that game for this year.

"We are more confident now, we're more experienced and more prepared than we were last year.

"We've got another chance to do it. It's going to be a great occasion, and the lads will really be up for it.

"Sunday is the obstacle in front of both me and the team getting back into a final, and we will be doing all we can to get to Cardiff (on May 24)."

The second-tier Amlin Challenge Cup also continues on Sunday, with Wasps and Bath meeting at Adams Park. The winners will face Northampton in the 24 May final. 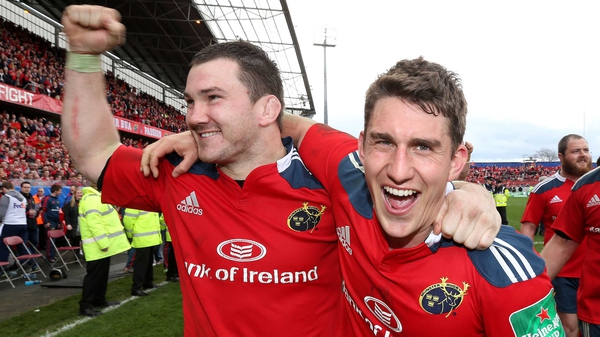