Munster won the battle of the Heineken Cup heavyweights as they floored four-time champions Toulouse 47-23 at a raucous Thomond Park.

Simon Zebo and Paul O'Connell crossed in the closing minutes to wrap up a runaway six-try victory as the Irish province advanced to their 11th semi-final in 15 years.

The French giants were swept away by the relentless red tide early on, Keith Earls' fifth-minute try helping Munster establish a 13-3 advantage.

There were only four points between the sides at the break after the wind-backed Luke McAlister kicked two more penalties.

But CJ Stander, who stepped in for injured captain Peter O'Mahony, produced a dominant man-of-the-match display to power Munster through a sticky patch.

Although second-half tries from Hosea Gear and Joe Tekori reduced the arrears to 27-16, Rob Penney's men made certain of their progress as Zebo and O'Connell followed Dave Kilcoyne and Stander over the try-line.

Munster will face the winner of tomorrow's semi-final between Toulon and Leinster in the tournament's last four.

Former All Black McAlister received a late call-up to the Toulouse starting line-up after shaking off a back complaint.

Munster lined out as selected, with O'Mahony stealing an early lineout and setting the tone for a real fire and brimstone start.

A barrage of phases - 20 in all - saw Munster tear into the Toulouse 22 and, armed with a penalty advantage, Zebo's looping pass sent fellow winger Earls over in the right corner. 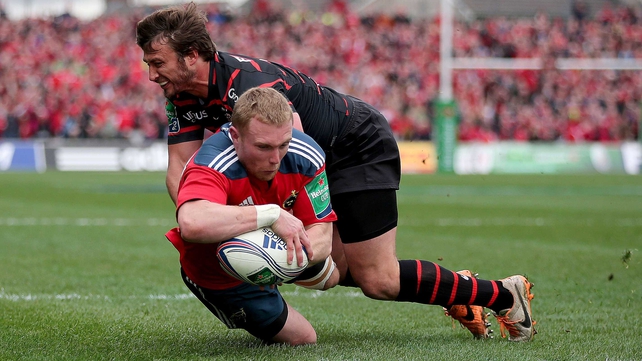 Ian Keatley's successful conversion was cancelled out by an immediate McAlister penalty, with the monster French pack managing to catch their breath.

They were back behind their posts when Keatley made it 10-3 after a maul infringement. O'Mahony's enforced withdrawal brought Stander into the fray and, from another muscular maul, Tekori denied the sniping Conor Murray.

But the resulting scrum saw Yohan Montes cough up Toulouse's sixth penalty of the afternoon, allowing Keatley to widen the gap to 10 points.

McAlister whacked over a long-range penalty on the half-hour and, as Munster's error count increased, he nailed his third successful kick.

Defences were on top approaching half-time, with Felix Jones' textbook tackle forcing a handling error from his opposite number Maxime Medard, while Toulouse thwarted a late Munster maul effort.

The province's mastery of the rolling maul paid off just 90 seconds into the second half, though, their forwards storming through and Murray's snipe providing the platform for prop Kilcoyne to plunge over.

They added a second close-range try soon after as Stander burrowed over for his first tournament score - a nice birthday present for the 24-year-old South African.

Keatley converted both to open up a 27-9 lead and referee Nigel Owens lost patience with the scrummaging of the front rows, sin-binning both Kilcoyne and Montes.

Keatley's first missed penalty was followed by the best try of the afternoon, New Zealander Gear galloping away from Keatley and Laulala after a fantastic feed by replacement prop Cyril Baille.

No French team has ever won at Munster's Limerick citadel. Indeed, the province had only lost two of their previous 50 cup outings at the venue and they reasserted themselves in the final quarter.

Keatley took his tally to 15 points and Beauxis' blunder from a quickly taken restart allowed Munster to spin the ball wide for Laulala to score. 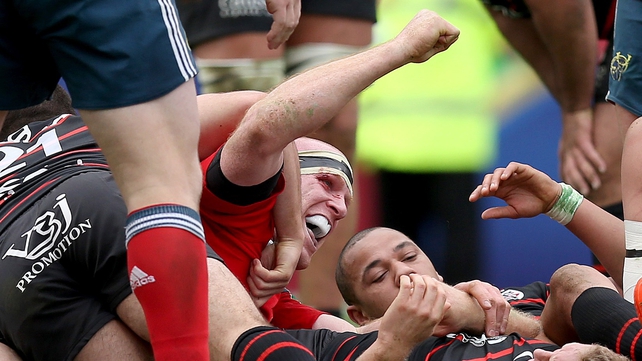 Flanker Tekori bulldozed over for what was ultimately a consolation effort, before a superb Stander turnover led to Zebo touching down with five minutes left and O'Connell crashed over for his first Heineken Cup try since 2009. 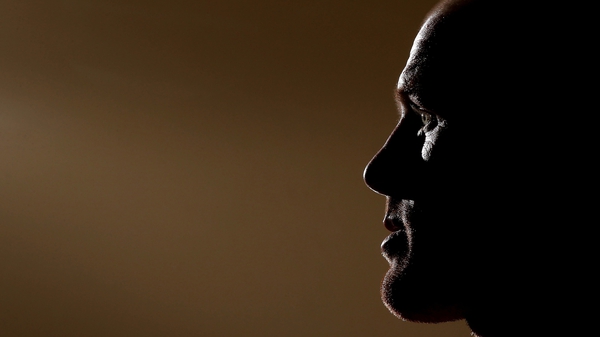