Munster returned to the top of the RaboDirect PRO12 table after seeing off the Ospreys 25-11 with a clinical display at Swansea's Liberty Stadium.

Tries from flanker Sean Dougall, Ireland wing Simon Zebo and centre James Downey were enough to move Munster back above rivals Leinster as they registered their 13th league win of the campaign.

Rob Penney’s side had the edge in the forward battle and kicked astutely, while they also punished the home side's mistakes at crucial moments.

And despite Munster spending much of the second-half on the back foot, their defence proved more than up to the task.

Both teams went into the game shorn of Six Nations stars, with the Ospreys contingent watching from the stands following the win for Wales over France on Friday night.

And they saw Munster take the lead after just five minutes.

Opting against a kickable penalty at goal, the visitors instead went for a driving line-out and were rewarded when flanker Dougall touched down from powerful five-metre surge. Fly-half Ian Keatley converted from wide out.

The Ospreys, fresh from their 75-7 hammering of Treviso a week earlier, looked threatening in attack with Fijian wing Aisea Natoga to the fore.

But a strong Munster scrum allowed Keatley to extend his side's advantage with a penalty after 16 minutes.

The home side responded quickly with a successful kick from full-back Sam Davies, but Keatley restored Munster's 10-point cushion with a fine strike from 40 metres.

The home side were attempting to play with tempo, but were struggling to match Munster's nous at the contact area.

Davies, who had an off day with the boot, struck the upright with a long-range penalty, but with the clock ticking down to half-time, the Ospreys got the score they wanted through Wales squad member Ashley Beck.

Beck had declared himself 'not ready' for Wales and their Six Nations clash with France as he continues his recovery from a hip problem.

But there appeared nothing amiss with the classy centre as he shrugged off the challenge of Keatley before showing good pace and footwork to evade the cover and dive over for his fourth try of the season.

Davies pulled the conversion attempt and was then short with a long-range penalty with the final kick of an entertaining half.

Trailing 13-8 at the break, the Ospreys looked to pressurise Munster early in the second half, but were hit by a sucker punch five minutes after the restart.

After a series of phases, the ball squirted out of a ruck 60 metres out. Ireland and British Lions wing Zebo collected, twisted out of the tackle and raced unopposed down the touchline for his side's second try.

As they attempted to haul themselves back into the contest, the Ospreys – who dominated second-half territory and possession – were denied a score after the television match official ruled hooker Scott Baldwin had made a double movement as he attempted to touch down.

Davies found his range with a 68th-minute penalty to reduce the deficit to seven points, but moments later a break from replacement fly-half JJ Hanrahan put centre Downey away and he had enough strength and pace to touch down under the posts.

Hanrahan's conversion stretched the lead to 14 points, with the Ospreys' misery compounded by Ryan Jones being sent to the sin bin late on. 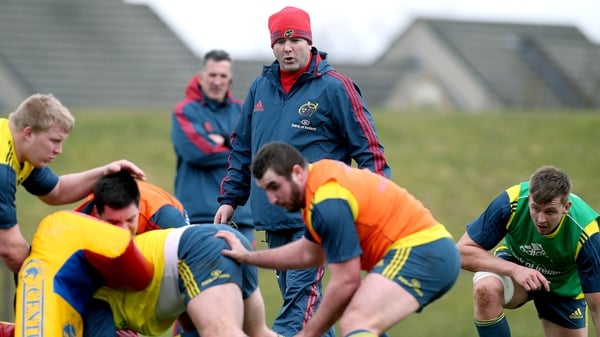