Munster have confirmed that Anthony Foley will take over as their new head coach at the end of the current season, replacing the outgoing Rob Penney.

Foley will take charge of the province in July and has agreed a two-year contract with the option for a third.

The current Munster forwards coach came close to being appointed head coach three years ago when he was part of a three-man short list than included Penney and former All Black Tana Umaga.

But having served his time, Foley has now been given the nod.

Munster confirmed that they have yet to decide on the make-up of Foley's backroom staff but skills coach Ian Costello is expected to be in line to replace Simon Mannix as backs coach.

Penney will leave for Japan at the end of this season, following two successful years in charge of the province.

"I am very happy to be selected as the next Munster Rugby head coach. It is a huge honour and privilege for me," Foley said.

"I am very fortunate to have played and achieved success with this club at the top level, my home club, and now I look forward to leading the next generation of Munster players to future success in the red jersey.

"But before that we have a job to do this season and I will continue to play my part, working closely with Rob (Penney), Simon (Mannix) and Ian (Costello), as we push for titles."

Munster CEO Garrett Fitzgerald welcomed the news and added: "Anthony was the stand-out candidate to succeed Rob Penney at the end of the season and I believe he will do an excellent job in leading this squad forward.

"His experience and knowledge is of huge benefit to this young Munster side and I'm sure it will be an easy transition for both the players and backroom team to carry on the positive progress already made.

"I am glad that all parties could come to an agreement in such a prompt manner as we continue to focus our efforts on the remainder of the season. In the next few months Anthony will continue to play his part in the coaching team, supporting Rob, as Munster challenge for silverware in both competitions."

Live television coverage of Cardiff v Leinster from 20:00 on Thursday 20 February on RTÉ Two and RTÉ.ie (Ireland only). 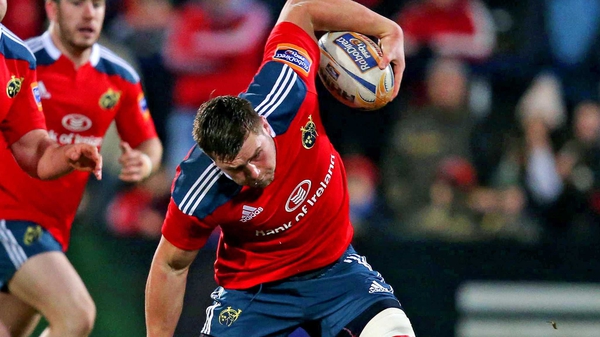 Munster's CJ Stander not fully satisfied with win over Zebre