Connacht remain bottom of the RaboDirect PRO12 table after an 8-6 loss to Glasgow Warriors in Scoutstoun.

With the wind behind them, Connacht led 6-5 at half-time thanks to two penalties from Craig Ronaldson while Glasgow's man-of-the-match scrum-half Henry Pyrgos had set up Glasgow's try from centre Mark Bennett.

Glasgow's winning penalty was kicked by Ruaridh Jackson three minutes into the second half and thereafter they were thwarted by Connacht's determined defence.

Connacht centre Ronaldson missed a penalty chance from four metres inside his own half in the third minute but in the eighth he struck a much easier one home to open a 3-0 lead.

In the 19th minute Glasgow took the lead with a superb score engineered by Pyrgos, who had already been showing a nose for a gap.

Breaking into open country from a ruck just over halfway and after a long run struck the correct kick to his right for centre Bennett, who gathered the slippery ball and went over for an unconverted try.

However, with play continuing to be confined to the Glasgow half by the elements, Pat Lam's side turned ahead thanks to a last-minute penalty from in front of the posts by Ronaldson after referee Leighton Hodges punished Glasgow tighthead prop Ed Kalman.

This followed a couple of missed efforts by Ronaldson in the 24th and 29th minutes and Glasgow having resisted a long period of pressure under their bar, sparked by good work from Connacht's George Naoupu and John Muldoon after Glasgow spilled possession.

It took less than two minutes of the second half for Glasgow to retake the lead. A 20-metre break by lock Leone Nakarawa produced a simple penalty for Jackson to kick.

Soon after, with the pattern of the first half replicated only Glasgow now had the wind advantage, Jackson failed with a long drop-goal effort.

Glasgow replaced their complete front row ten minutes into the second period but penalty offences in the tight scrum continued to dog their efforts.

With ten minutes to go Jackson failed with a long penalty kick and three minutes later with a much closer effort. 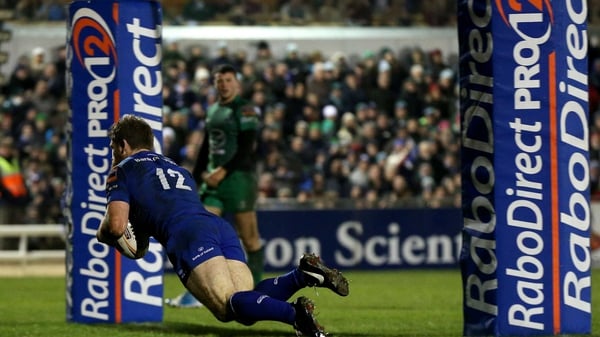