Leinster's greater strength in depth helped them complete a festive derby double at the Sportsground as they got the better of a youthful Connacht side with a 16-8 triumph.

Following up on their 19-6 Dublin defeat of Ulster a week ago, Matt O'Connor's men came good in the second half in Galway thanks to two Jimmy Gopperth penalties and a 73rd-minute converted try from Gordon D'Arcy.

Fionn Carr's second try in three league games had Connacht 8-3 ahead at the break, with Ian Madigan and Jack Carty exchanging penalties.

But with their bench having an impact, the visitors hit the front for the first time in the 63rd minute and replacement Gopperth set up D'Arcy's first try since last April to seal the win.

The result left Leinster three points adrift of leaders Munster at the top of the RaboDirect PRO12 standings, while Connacht slip to the foot of the table following Zebre's win earlier on Saturday.

Pat Lam handed 21-year-old fly-half Carty his first start, and Darragh Leader and Kieran Marmion also featured in a Connacht back-line that had an average age of just 22.

A pinpoint early touchfinder settled Carty's nerves, but Connacht failed to capitalise on an initial bout of pressure as both sides probed with the boot.

Jason Harris-Wright was isolated for a 13th-minute ruck penalty that Madigan sent narrowly wide and the stalemate ensued for another nine minutes.

It took a brilliant break over halfway from Robbie Henshaw to light up proceedings.

With Brian O'Driscoll shooting up out of defence, Henshaw did well to evade Dave Kearney's grasp before passing wide for former Leinster winger Carr to charge over in the right corner past Madigan's covering tackle. 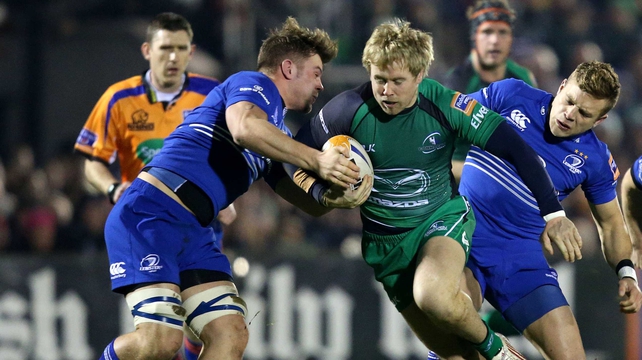 Carty was unable to convert and full-back Leader missed two long-range penalty efforts in quick succession, while the crossbar denied Madigan on the half-hour mark.

In a game of few line-breaks, ex-Connacht hooker Sean Cronin got Leinster on the front foot before an Andrew Browne infringement allowed Madigan to open the visitors' account at the third attempt.

But Connacht responded on the stroke of half-time, Matt Healy and Browne gaining good ground on the left and Carty rewarded them by finding the posts from a subsequent penalty.

Connacht maintained their lead during the early stages of a rain-hit second period, with Leinster having to bide their time.

Gopperth, who came on as part of a trio of replacements, cut the gap to 8-6 with his first penalty attempt in the 57th minute.

The New Zealander then added another six minutes later following a Jamie Heaslip charge from a scrum to give his side the lead.

A late tackle by the Leinster captain on Parks then led to a kickable penalty at the other end, but the latter missed the target on the near right side.

Heaslip, who was fortunate to avoid a yellow card for his shoulder-led challenge, was central to a strong spell of carrying that preceded D'Arcy's decisive try.

Leinster built from a lineout maul on the left and Heaslip, Devin Toner, man-of-the-match Jordi Murphy and Dominic Ryan all took the ball on before Gopperth slipped a pass away for the supporting D'Arcy to nip in behind the posts. 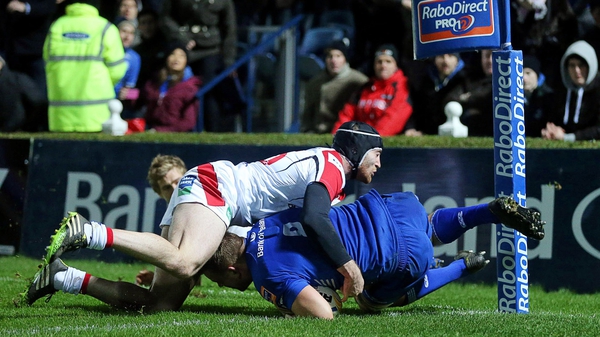