Paul O'Connell cannot imagine life without Brian O'Driscoll, but is relieved Ireland do not have to find out what it will be like until next season.

The 35-year-old Leinster star is already Ireland's all-time leading try-scorer with 46, and will no doubt be hunting 50 before he hangs up his boots.

Ireland captain O'Connell has signed a new Munster contract that will push him until 2016, the 34-year-old eyeing World Cup action in England next year.

Admitting both he and O'Driscoll are running out of tape and sticking plaster to hold their battered bodies together, O'Connell is expecting a big final tournament from Ireland's former captain.

"Brian has so much experience at this stage, his body seems to be in great shape," said O'Connell.

"The two of us are generally first out to warm up these days because it takes us a bit longer to get going than everyone else!

"So we have a chat on our own while we're waiting for everyone else to come out.

"But he's on great form and really looking forward to it.

"It's tough to think what it will be like without him.

"Obviously he's a fantastic player but the confidence he gives to people around him as well, even to the forward pack is massive for the team, and it's going to be a big loss to the team."

O'Connell said Ireland see no reason to blood youngsters and build for the future if they can tilt towards a first Six Nations title since the 2009 Grand Slam.

"The two of us are generally first out to warm up these days because it takes us a bit longer to get going than everyone else! - Paul O'Connell

"Luke will definitely show what he can do this weekend, and it's a good call from Joe (Schmidt)," said O'Connell.

"But any time you are in the Six Nations you select your strongest team, that's what Joe has done this week and that's what he'll do throughout the tournament.

"So if Brian O'Driscoll's available for the entire championship, I want him out there, and I'm sure everyone else will too.

"Brian will definitely want to be out there, that's for sure."

"We hope that factors onto the field on Sunday.

"He's pretty understated on the fact he will be Ireland's most-capped Test player.

"I know to him every one of those caps is incredibly special.

LIVE: RBS SIX NATIONS
Live television coverage of the opening weekend of the RBS Six Nations from 14:00 on Saturday 1 and Sunday 2 February on RTÉ Two and RTE.ie (Ireland only). 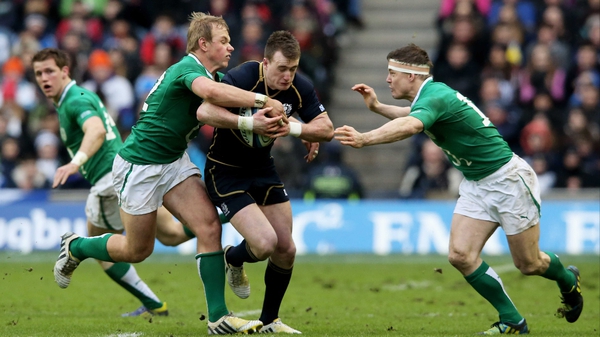