Munster moved into the Heineken Cup quarter-finals as Pool Six winners after subduing Gloucester's admirable resistance, 20-7, at a sold-out Kingsholm.

The 2006 and 2008 European champions prevailed through tries in each half from wing Keith Earls and skipper Peter O'Mahony, while Ian Keatley kicked ten points.

Gloucester, though, delivered a stirring display and they went down fighting, arguably deserving more than Charlie Sharples' converted try as Munster triumphed.

It means Munster are now through to their 15th Heineken quarter-final - an ongoing tournament record - as they joined fellow qualifiers Ulster, Leicester, Clermont Auvergne and Toulon in the last eight.

And if they beat Thomond Park visitors Edinburgh in next Sunday's final pool fixture (12.45pm), then it should be enough to secure a home tie as one of the top four group winners.

Gloucester can only dream of such consistency and success, but at least their display will give renewed hope to supporters who have seen their team suffer seven home defeats this season.

Gloucester had spent the week regrouping following a 29-8 home loss to Aviva Premiership leaders Saracens last Saturday, and they made an encouraging start that was highlighted through a thrilling counter-attack sparked by speed merchants Sharples and Jonny May. 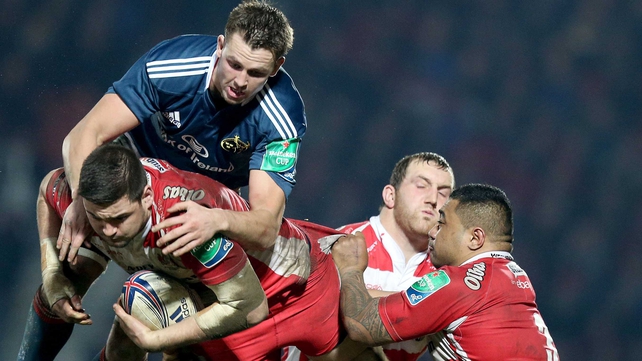 Skipper Billy Twelvetrees, though, missed an 11th-minute penalty chance that would have opened the scoring as Munster attempted to take the sting out of proceedings in front of a capacity 16,500 crowd.

Keatley showed him how it should be done when he bisected the Gloucester posts ten minutes later, and Twelvetrees then drifted another penalty wide despite perfect conditions for goalkicking.

Twelvetrees was preferred as first-choice marksman to Freddie Burns, but he had done little to justify rugby director Nigel Davies' faith in him after Munster shaded a tense opening quarter.

Gloucester were noticeably improved on their performance against Saracens, but they had no answer when Munster increased the tempo eight minutes before half-time.

Keatley added the conversion, and for all Gloucester's determination and spirit, they found themselves in danger of facing a damage-limitation exercise before they responded magnificently just before half-time.

It was a superb riposte by Sharples after he failed to make either the elite England player squad or England Saxons group earlier this week, and Burns' conversion after he replaced Twelvetrees off the tee meant Munster's lead had been slashed by seven points.

Munster lock Dave Foley was fortunate to avoid a yellow card after he took out Stooke in the air as the second half got under way, but it did not knock Gloucester out of their stride as they enjoyed territorial supremacy.

Davies sent on back-row reinforcements after 50 minutes in the shape of England number eight Ben Morgan and Tonga flanker Sione Kalamafoni, and there remained an assuredness and dogged desire about Gloucester that had often been lacking on previous occasions this term.

Munster knew they were in a game far closer than many had predicted, and they had to call on all their European big-game experience to stay ahead of a Gloucester side that contested aggressively in every key area. 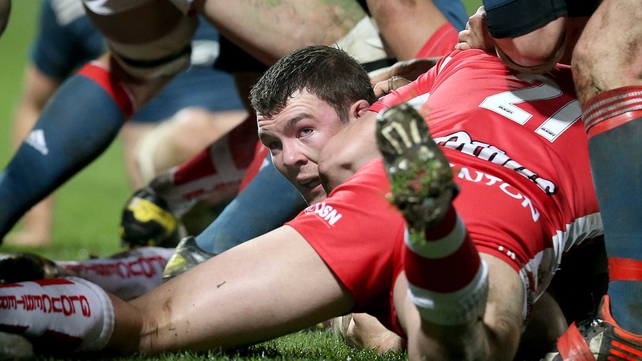 And it was a case of cometh the hour, cometh the men, as Munster scored a critical try midway through the second period that owed everything to their set-piece power.

Gloucester's scrum struggled to cope 15 metres out, and the outstanding O'Mahony crashed over from close range after scrum-half Conor Murray, who had been out injured for five weeks, marshalled his forwards superbly.

Keatley added the extras, and Gloucester found themselves ten points behind approaching the final 15 minutes of an absorbing encounter, before another Keatley penalty finished them off and took Munster marching on. 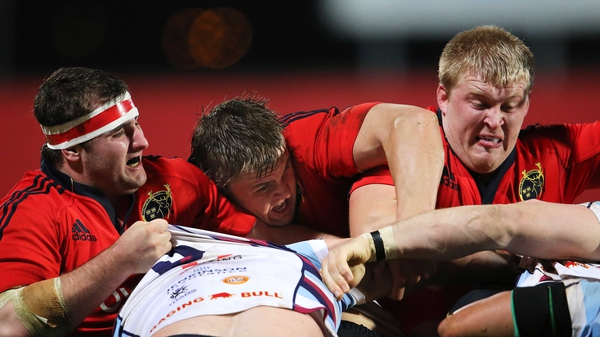