A disjointed Ireland were comprehensively beaten 32-15 by a classy and creative display from Australia at Aviva Stadium.

The Wallabies surged into a 15-6 lead after 29 minutes, with a try apiece from Nick Cummins and Michael Hooper, allied to kicks from Quade Cooper, putting them in the driving seat.

Two Sexton penalties kept Ireland in touch, while two further kicks at goal from the same player put the hosts within three at the break.

However, the second half was not pretty for Joe Schmidt’s Ireland as Ewen McKenzie’s Wallabies dominated the tie.

The visitors went over for two further tries from Cooper and Hooper, while the former also smashed over two conversions and a penalty.

With Sexton not returning for the second half with a hamstring injury, Ireland’s sole second-half score came from a Madigan penalty as they limped to a painful home defeat, which has left them with plenty of homework ahead of next weekend's clash with New Zealand.

Neither side dominated the early exchanges as both teams grappled with each other, attempting to get a sense for the tie.

Ireland’s No 10 Sexton looked a little edgy as he missed touch with a clearing kick, which the Australians failed to capitalise on.

The crowd also got an early chance to see fullback Rob Kearney go head-to-head with his opposite number Israel Folau. Kearney kicking an early up-and-under to chase onto himself, but Folau got there to make the catch, showing the eye for the dropping ball and speed to take him away from Kearney. 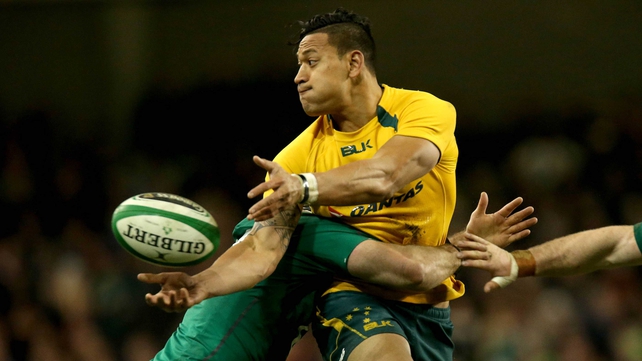 The first major chance of the game came from a crossfield kick from Cooper for Adam Ashley-Cooper to chase onto down the right flank.

Nobody was at home for Ireland, but the ball was slightly overcooked and went to touch. However, it served as an early warning for the Irish team that their southern hemisphere opponents were planning on testing Ireland out wide.

Soon after, from a lost Ireland lineout, Australia again attacked wide. However, Ireland kept their width to run the Aussies into touch just metres from their tryline.

It was mostly Australia in the ascendency at this point, but they conceded three penalties from which Sexton cleared the Irish lines with aplomb.

However, from the next ruck Ireland infringed themselves for the first time, allowing Cooper the chance to go for goal from outside the Ireland 10-metre line. He duly slotted the egg over the sticks from a line directly in front of the posts for 3-0.

Ireland went straight back up the pitch with intent, winning possession from a Sean O’Brien lineout before the ball was moved wide to Kearney joining the line. The fullback couldn't unleash the onrushing Bowe with a killer pass that would have done damage to the Wallabies.

Ireland leveled the tie on 12 minutes, with the Australians conceding a penalty for hands in the ruck following a Devin Toner attack on a popped ball. Sexton, from in front of the posts, just outside the 22, leveled the scores at 3-3.

Ireland were lucky not to go behind again minutes later with Mike Ross collapsing the scrum and referee Chris Pollock awarding an Aussie penalty. Cooper skewed the kick at goal wide left, from just inside the 10-metre line.

However, Australia were beginning to hum. From a scrum they spread wide left, with hooker Stephen Moore joining the backline. He made a line break and when he was eventually pulled down by Tommy Bowe, passed outside to Cummins who took a line which brought him inside Kearney, who missed the tackle for the winger to stride over for the score. Cooper converted from wide left. 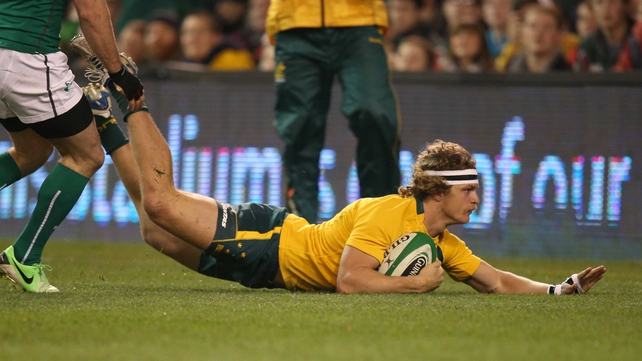 Ireland went right back up the pitch, with Bowe attacking with ball-in-hand down the centre to pull them up to the Aussie 22, before Ireland moved wide right, where Scott Fardy deliberately slapped down the ball.

Pollock didn’t award a yellow card, but did give a penalty, which Sexton drilled left and wide, from the right-hand side; a poor kick by his high standards.

Australia’s second try came not long after when Fardy and Cummins combined out wide to release Hooper to sprint free of the Ireland defence and over the whitewash for a try almost identical to the Australian’s first in this Test match.

Cooper, from wide left on the 22, missed an easy conversion to leave the score Ireland 3-15 Australia.

Wounded, the Irish swarmed at Australia, with captain Paul O’Connell leading with ball-in-hand as his side went through several phases of play, to win a scrum on the Aussie five-metre line. Australia wilted at the scrum and Pollock awarded a penalty to Ireland - the men in green opting to pack down again.

Winning the scrum Ireland went hammer and tongs at their opponents, but couldn’t find way through as the yellow wall held firm.

There was to be a return; however, as Matt Toomua was caught offside in defence and Sexton slotted over a penalty from in front of the posts for 15-6.

Ireland proceeded to attack Australia with ruck fringe plays, which the Aussies repelled successfully, before Hooper put his paws in the ruck once more and referee Pollock decided repeated infringements called for a yellow card. Sexton slammed the penalty between the posts from the 22-metre line for 15-9.

Australia attempted to strike back immediately but failed as they conceded a penalty on the Ireland 22.

Just before half-time, Australia again played the ball on the deck, giving Sexton a further chance to split the posts with a penalty. And that he did from midway between the 22 and 10-metre lines to put Ireland within three of Australia at the break and very much in the tie.

Ireland emerged for the second period without outhalf Sexton, who appeared to have aggravated his hamstring just before the end of the first 40 in Dublin 4. He was replaced by Leinster’s Ian Madigan.

The entire Australia team stayed on the Lansdowne turf for head coach Ewen McKenzie’s half-time team talk, and that technique appeared to work wonders as they started the second 40 in cracking fashion going phase-after-phase before spreading wide to Cummins on the left, who snuck over in the corner, with Bowe desperately grappling to make the cover tackle. The referee went to the TMO who correctly judged the ball was knocked-on.

But Australia didn’t have to wait long for their try. From a five-metre scrum they spread to midfield, where Cooper slalomed between Madigan and Luke Marshall to dot down for the easiest of scores. The mercurial outhalf converted himself to make it 22-12.

And as Ireland failed to wake up following their half-time mugs of Bovril they conceded yet another penalty, which Cooper slotted from wide right to make it 25-12, as McKenzie’s team again took the game by the scruff of the neck.

Ireland finally began to get to grips with the second period when they won a penalty from a scrum after the Australians has infringed three times at the set-piece. From wide left, outside the 22, Madigan hammered the penalty over the sticks to make it a ten-point game.

The next score should have gone Ireland’s way as the Australians were again done for offside in defence, but Madigan opted to kick for touch instead of taking a very kickable effort at the sticks, which would have reduced the arrears to seven points.

The men in green then knocked on at the ensuing maul as the attack came to an end without any score from a promising position.

The Wallabies came wave after wave at Ireland, with Cooper pulling the strings as Schmidt’s team attempted to repel their attacking creativity.

Australia’s ability to win rucks, while committing far less numbers to the breakdown, continually putting the Irish side under pressure in the loose.

The death knell began to sound as Australia went over for a fourth try, mauling their way across in the left corner with Hooper touching down as the Ireland pack folded like a cheap suit. Cooper converted from wide left to make it 32-15 with 12 minutes to go and leave Ireland fighting for consolation scores.

Madigan attempted to get his backline purring as he swung possession right and left, but Australia’s tails were up and they swamped every Irish attack, looking to extinguish any slim hopes of a fightback from their hosts. 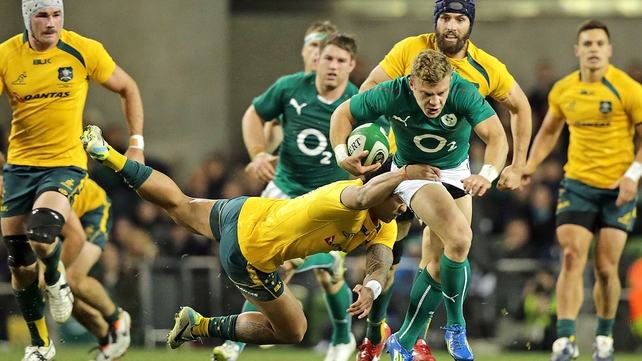 Tevita Kuridrani crossed the line of legal defending with eight minutes to go; however, when he upended Peter O’Mahony in a tip tackle and was given a red card as a result.

Ireland regrouped and Marshall surged into the 22 to give Ireland a fine attacking position from which they attempted to ruck over, but were held up by the Aussie pack, before going wide right where O’Driscoll was stopped five metres short. In that same attack, Kearney shipped a nasty blow to the chest, which saw him replaced by Robbie Henshaw.

With play restarting from a scrum, the Irish failed to dominate again, being penalised for collapsing, as once more they failed to take points from a position within Australia’s 22: a recurring feature of the match.

It was all Ireland at this stage, and with three minutes to go Henshaw set Bowe free up the centre, before the Australia defence swallowed the Ulster winger up.

Henshaw and Marshall were prominent as Ireland smashed their way towards the Australia line, before Sean Cronin was set free by replacement scrumhalf Conor Murray to power over the whitewash beside the right post.

However, play was pulled back for a knock-on at the base of the ruck by Murray as an Aussie hand disturbed his handling of the ball.

That was the last chance of a match that gave a clear indication that Ireland have plenty of long-term work to do on their road to the World Cup in 2015, and just as much of a workload short-term with the impeding visit of the All Blacks next Sunday. 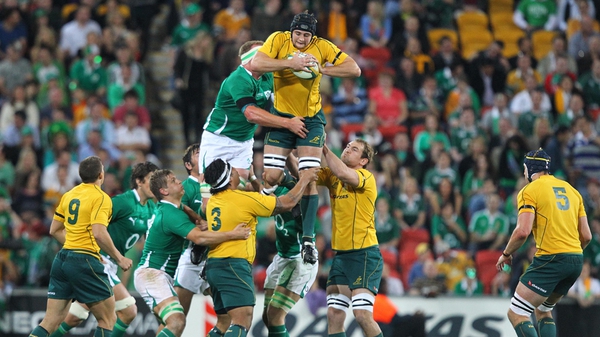