Connacht head coach Pat Lam was delighted with his team's 33-6 win over Zebre in Parma even if the visitors missed out on a bonus point.

George Naoupu and Mata Fifita touched down for the westerners and Dan Parks kicked seven from eight for an impressive 23-point haul.

Qualification for the knock-out stages still remains a long shot with a December double-header against Toulouse looming.

The bonus point might have given them a better shot going into that one, but Lam was not about to complain.

"The reason it's called a four-try bonus point is because that's what it is, a bonus," he said.

"First and foremost you have to nail the game. There's no point scoring four tries and then losing the game.

"There's no doubt that we went for it at certain stages, but credit to Zebre for holding us out. But overall we're happy.

"That was a very good team performance by us, a very disciplined performance, especially on the back of what happened last week (against Saracens)."

"There was a lot of pressure on us to come out here and win, and to do it so convincingly was satisfying" - Pat Lam

Connacht were edged out at home by Saracens in their pool opener.

"Everyone said well done for running Saracens close, but asked whether we could do it again," Lam said. "So there was a lot of pressure on us to come out here and win, and to do it so convincingly was satisfying."

For Zebre captain Marco Bortolami, it was a yet again a case of what might have been as the Italian outfit continue to chase their first victory in Europe.

"Our biggest failing, as is so often the case, is that we failed to turn possession into points.

"We tried to play positive rugby and we carved out many opportunities, but all too often we left with nothing.

"Contrast the performance of Connacht. They didn't dominate us but it seemed as though every time they launched an attack, they came away with something.

"Credit to them, they are a good team, and they are a team that we can learn from in terms of the way they accumulate points. You have to take your chances at this level, because if you don't then you can't compete." 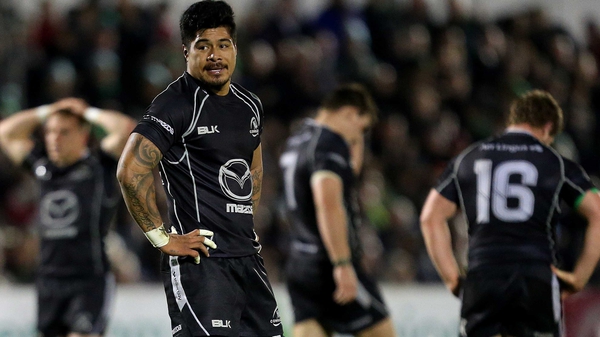