Young Cardiff fly-half Rhys Patchell scored all 21 points for the Blues, who claimed their first RaboDirect Pro12 win of the season, beating Connacht 21-10.

Twenty-year-old Patchell, who has already represented Wales twice this year, was nigh-on flawless with the boot, scoring six penalties and a first-half drop goal.

Connacht had a 10-9 lead at the interval thanks to wing Matt Healy's try, while former Blues fly-half Dan Parks, who is now player-coach with the Westerners, converted and added a penalty but they faded thereafter and Patchell scored 12 unanswered points to seal victory for Cardiff at Arms Park.

Wet and windy conditions at Arms Park meant several errors were committed by both sides.

It was the visitors who started brightly although Parks failed to get Connacht's first points on the board after seeing his penalty attempt from halfway land just short of the crossbar, while Patchell also booted off the right post.

Pat Lam's men went ahead in the 12th minute, however, when they burst forward and George Naoupu's pop pass to Healy allowed the wing to slide over, with Parks adding the extras.

Patchell got Cardiff off the mark with a penalty from the halfway line after Naoupu had infringed at the scrum and the Welshman added another to cut the deficit to a point before his drop goal gave the Blues a 9-6 lead.

Parks gave Connacht a slender advantage with a penalty on the stroke of half-time and the visitors came out firing after the interval, with Healy only denied a second try by a vital intervention from Filo Paulo.

They then fell behind as Cardiff's forwards won a penalty at the scrum, which left Patchell with a simple three-pointer to give the home side a 12-10 lead.

Cardiff had several chances to score their first try of the night, but failed to kill off the game, while both Parks and Patchell missed with penalty attempts.

Patchell would redeem himself with a well taken three-pointer from the right and added another as the Blues took an 18-10 lead into the final five minutes.

Rodney Ah You was sin-binned to leave Connacht to close out the game with 14 men and a high tackle from Paul O'Donohue gave Patchell the chance to take his tally to 21 points for the evening, which he did with aplomb. 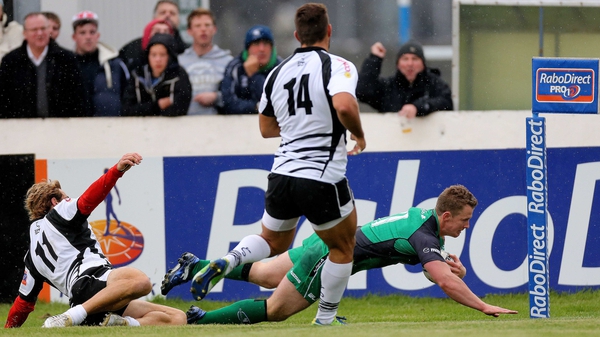