British and Irish Lions prop Cian Healy has been cited for allegedly biting Brett Sheehan in today's match against Western Force and will appear before a hearing tomorrow, the Australian Rugby Union has confirmed.

Healy was carried off and taken to hospital for an X-ray on his ankle during the 69-17 victory over Western Force at Patersons Stadium.

Although his ankle is not broken, there are fears he has suffered ligament damage, which could mean the end of his tour.

Force scrum-half Sheehan made a biting allegation during the game against an unnamed Lions player, and Sheehan's opposite number Conor Murray could be in trouble for an alleged stamping incident.

Match citing officer Freek Burger asked Sheehan to provide him with a statement after the game, while the Murray incident is also being looked at.

On Healy, Lions head coach Warren Gatland said: "They've just said it is not broken but they think it is ligament damage, so we will just have to wait for 24-48 hours and see what happens.

"He went for an X-ray and it wasn't broken. We just assume it is ligament damage. He may need to have a scan to further delve into the potential of the injury.

"We've got (loosehead) Gethin Jenkins, who will start on Saturday (against Queensland Reds). Gethin is back training fully.

"We will potentially talk about someone tonight that we may bring out once we have found out what sort of condition Cian is in and they've had a chat to him."

"If it is the end of his tour, it is bitterly disappointing. You wait and hope over the next 24 hours that it is not as bad as first perceived" - Brian O'Driscoll

If Healy has to be replaced then the choice would appear to lie between England's Alex Corbisiero, who is currently on tour in Argentina, Scotland's Ryan Grant and Welshman Paul James.

Lions captain Brian O'Driscoll said: "I understand how hard people work towards getting on this tour.

"If it is the end of his tour, it is bitterly disappointing. You wait and hope over the next 24 hours that it is not as bad as first perceived."

Asked about the alleged biting, Gatland told reporters: "I know as much as you know. I think the citing guy has had a look at it and he can't see anything."

The game was held up while television match official Glenn Newman looked at replays from different angles of any alleged offence, but nothing materialised from that footage.

And Force head coach Michael Foley refused to elaborate on it at his post-match press conference, saying only: "It was dealt with by the referee at the time."

The post-match business took some gloss of an efficient Lions display that saw them score nine tries and full-back Leigh Halfpenny deliver a goalkicking masterclass by scoring 24 points from nine conversions and two penalties. 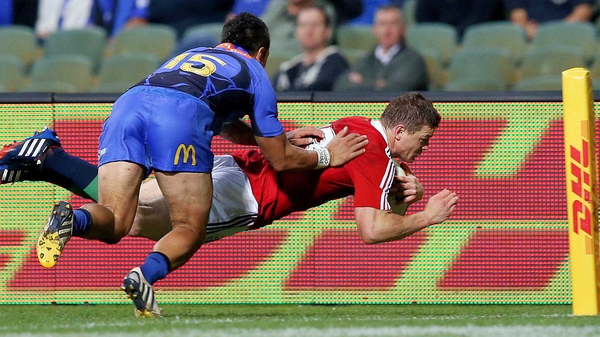