Ireland assistant coach Les Kiss feels there should be a rule change concerning missed drop goals after his side's defeat to New Zealand in the second Test.

Kiss was unhappy that Dan Carter was gifted a second chance to land the winning drop goal.

Referee Nigel Owens awarded a five-metre scrum to the All Blacks after Carter's first attempt at a game-clincher was deflected wide then touched down, behind the posts, by Eoin Reddan.

"If you go for a drop goal and miss then why should you get the ball back from a missed kick?" asked Kiss.

"That shouldn't have been their advantage. They went through it and missed it as we were good enough to stop it.

"It is like a tackle. If we tackled him there, trying to attempt a field goal, but we tackled him before it, we would get the ball back. But that doesn't happen. That's probably a law (the International Rugby Board) could look at."

Join Michael Corcoran for full live commentary on the third Test between New Zealand and Ireland on Saturday 23 June from 8.30am on RTÉ Radio 1 Extra, LW 252 and RTÉ.ie

The Australian believes Ireland pressured the All Blacks consistently throughout the Test match in Christchurch and cut out the space that led to first Test woes against the likes of Julian Savea and Conrad Smith.

He said, "We are in the coaches' box and you can't hear it all the time but when you opened the door and heard the noise, the fans were chanting 'All Blacks, All Blacks'. I haven't heard that for a long time.

"It was an intimate stadium and they certainly felt it was a ridgey didge, or a fair dinkum, Test match and they were totally engaged in it."

Kiss added, "They played well but they couldn't break us. It was fantastic, what the boys did, but unfortunately you want to win and that is the taste that is left in your mouth."

Kiss also hopes scrum-half Conor Murray can build on his improvement through the series against New Zealand as he goes into Saturday's third Test in Hamilton.

"Conor, in the previous game, was on the back end of a quality of ball that was just not good enough," said Kiss. "Our breakdown work wasn't poor but it wasn't consistently effective.

"Our ball carrying and the service we gave, not just to Conor, was not as good as we would have liked. We got a bit better at the weekend."

He added: "Conor is a fantastic sponge who always wants to improve his game. What we saw at the weekend was just another layer.

"Was it a defining game for him? No. Every game is a defining moment but I think he found another part to his game and that will serve him going forward.

"I think the big challenge is to make this next game, this next opportunity, something that builds on that."

The final Test in Hamilton on Saturday is shaping up to, once again, be a battle of attrition and Kiss feels the squad has benefited from the 'inspiring' surroundings of Queenstown, where Ireland are based for five days.

They will be without Gordon D'Arcy, who shored up the midfield area in the second Test but has returned home with a calf injury, but Kiss played down the Leinster centre's absence.

Kiss said: "I wouldn't say it was anything to do with personnel and that is not taking anything away from Gordon. I think he has been brilliant for us.

"The truth is that the All Blacks are a fantastic team and the way that they open up space for their backs and their loosies (back row) is a hallmark of their game. They just couldn't get that purchase in the game the way they would have liked.

"The likes of Aaron Smith, Conrad (Smith) and Sonny Bill Williams, they couldn't quite get the game they would have liked but they just kept coming, that's for sure." 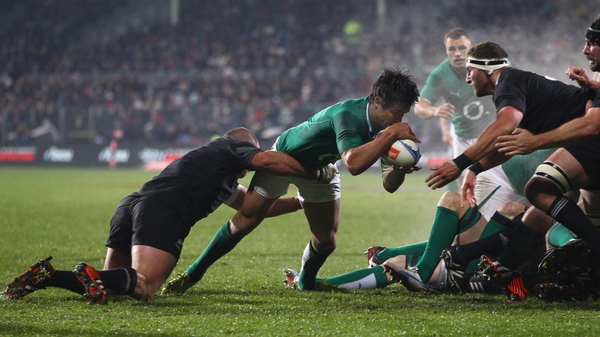