A Dan Carter drop goal with 60 seconds left on the clock gave New Zealand a dramatic win over Ireland after a gripping encounter in the second Test in Christchurch.

The Irish led 10-9 at half-time through a Conor Murray try and kicked points from Jonathan Sexton, but an Aaron Smith try just after the break edged the All Blacks ahead.

Sexton kept his side in touch with solid goal-kicking but Carter, a proud Crusaders player, had the last word.

The record books will state that Ireland have now lost 25 out of 26 fixtures against New Zealand.

However, with Israel Dagg sin-binned for a bad tackle on Rob Kearney, they never had a better chance to get that much-needed victory.

The selection of scrum-half Conor Murray had been a bone of contention in Ireland between the first and second Tests, but a strong tackle on the marauding Adam Thomson showed his worth early on.

Murray then scrambled well to win possession and Sexton kicked an awarded penalty deep into the New Zealand 22.

Two attacking line-outs followed for the Irish as they set up camp in enemy territory.

Cian Healy and Kevin McLaughlin had darts at the All Black line before Murray picked from the base of a ruck and backed himself to touch down from two metres out.

Sexton added the extras and Ireland hit the front. It was just reward for a brave decision to kick for the line-out rather than go for three points.

New Zealand, through Conrad Smith and Zac Guildford, pushed forward but Ireland's defence was ferocious. Brian O'Driscoll hacked clear and Sean O'Brien caused trouble inside the All Black half, leading for a penalty concession. Sexton's kick from 35 metres sailed over. 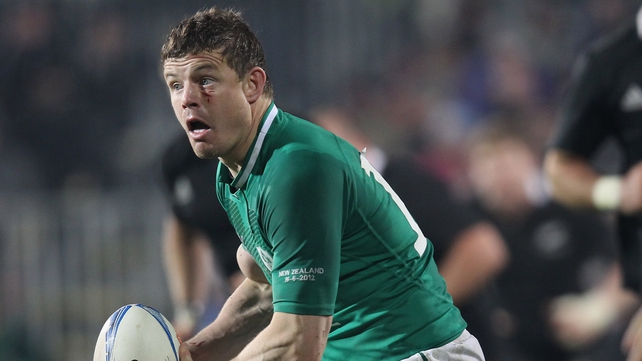 Carter recorded the world champions' first points of the match when referee Nigel Owens suspected the Irish of placing illegal hands in the ruck.

Fergus McFadden was then lucky to survive a high ball spill when Julian Savea, his tormentor from last week, knocked on.

Sean O'Brien let Carter know he was around after 26 minutes when he clattered into him moments after the out-half spun a pass left.

The Crusaders man was not badly shaken and made it 10-6 three minutes later after Dan Tuohy was penalised for not rolling away from a tackle on Richie McCaw.

Irish loosehead Mike Ross was the next guilty man at the ruck as he needlessly entered from the side.

It gifted Carter a third simple penalty and his kick sneaked in by the left-hand post.

The All Blacks fancied getting in ahead at half-time, but excellent work at the breakdown by O'Brien won his side a penalty and gave the Irish an attacking line-out.

Sexton chipped possession, however, away and Carter was given the chance to put his team ahead on the stroke of half-time.

McFadden was penalised for going off his feet at an attacking ruck, but Carter's kick from the halfway line dropped short and the score remained 10-9.

The All Blacks thundered into the Irish as the second half got under way and O'Driscoll was guilty of missing a tackle on Sonny Bill Williams on the right wing. A ruck ensued but Smith dived through a huddle of bodies for his first international try.

Carter added the conversion, but Ireland were awarded a penalty less than 60 seconds later as Thomson was adjudged offside. Sexton had the simple task of slotting a 20-metre penalty over.

McCaw was then lucky not to receive a yellow card after a short, destructive burst from the captain left O'Driscoll and Gordon D'Arcy on the turf.

D'Arcy limped off soon after, to be replaced by Ronan O'Gara, and Sexton moved to inside centre.

The Leinster man peeled around the back of an attacking Irish ruck after 56 minutes, but he could not offload in the tackle to the supporting O'Driscoll and New Zealand turned the ball over to clear.

The burden of expectation of the home side was apparent as the game neared its final quarter when Carter was jeered for trying, and failing, with a drop goal.

He redeemed himself moments later with a penalty from 22 metres out after Owens penalised the visitors for not rolling away near their line.

Ireland were not deterred and they hit back immediately with a great forward shunt on the scrum to earn another kick at goal for Sexton, which he landed.

O'Driscoll got a measure of revenge on 67 minutes as he ghosted past Sonny Bill Williams.

The daring Irish attack was rewarded as Ali Williams came in from the side to gift the visitors a penalty.

He then made Sexton's kick 10 metres easier after shoving O'Brien in the face. The Irish number 10 made it 19-19 with 11 minutes left on the clock. 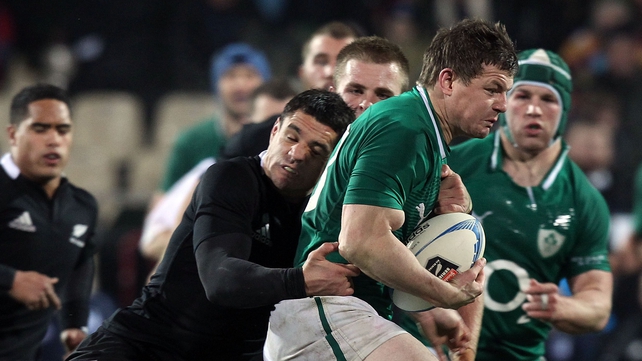 The advantage swung to the men in green two minutes later as Dagg was yellow carded for a late, head-high hit on Kearney.

A harshly adjudged knock-on call against Mike Ross gave the home side the chance to clear. The All Blacks were not content with getting a draw and they piled forward to give Carter a chance to kick a drop goal to clinch the game.

Carter's first effort was wide after he received a poor snap-pass, but the All Blacks remained composed. Their scrum was solid and Weepu dashed the ball back for Carter to try again.

The kick hardly soared, but it was enough to break Ireland hearts.

As it Happened: New Zealand 22-19 Ireland