Live blog on RTÉ.ie and the RTÉ News Now App from 8.30am

Live coverage on RTÉ2 and the RTÉ Player from 8am.

There is up to an 83% chance of rain throughout the day, with scattered showers expected as well as sunshine.  There could be a high of 18°C around midday which is expected to dip by a couple of degrees for a 6pm (local time) kick-off.

It seems a long time ago now (43 days to be precise), but 20 teams have been whittled down to two.

After 44 games in Japan, it is England and South Africa who will battle it out to succeed New Zealand as world champions.

The absence of the All Blacks in the decider for the first time since 2007 has raised eyebrows. Ireland's quarter-final conquerors marched into the last four, but were well and truly beaten by Eddie Jones' England.

On the other side of the draw, South Africa spoiled the local party by dumping hosts Japan out before edging past Wales in a semi-final that won't live long in the memory. 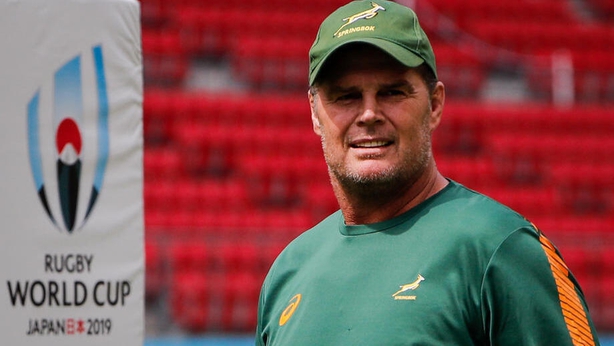 That will matter little to Rassie Erasmus. The former Munster Director of Rugby would dearly love to lead the Springboks to a third World Cup title before he departs his role as head coach.

Just how likely is a South African win?

Sticking to the tried and trusted - a fearsome pack marshalled by a sniping scrum-half - may not be enough.

Any pack featuring Tendai Mtawarira, Eben Etzebeth, Pieter-Steph Du Toit and Duane Vermuelen is a force to be reckoned with, while Faf de Klerk, even allowing for some erratic kicks, has been a sensation in Japan.

The return of deadly finisher Cheslin Kolbe is significant on the wing, while Makzole Mapimpi on the opposite flank has notched five tries in the tournament. Still, a repeat of the arm wrestle against Wales may not be enough against a battle-hardened England.

In fact, RTE rugby analyst Donal Lenihan is convinced of it.

"I don't think South Africa are going to change their approach at this stage. Rassie Erasmus has been very clear, he's stuck to a formula," said Lenihan.

"I think it's a terrible pity. The Springboks' brute force and physicality has been sufficient for them to make it this far." 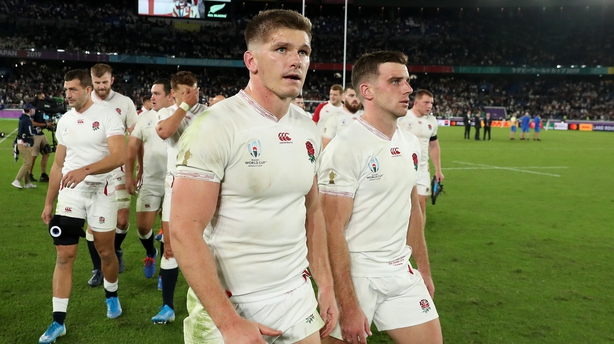 With good reason England are being tipped by many to be crowned champions of the world for the second time in 16 years.

Jones has named an unchanged team for just the second time since taking over as head coach and the average age of the starting XV is just over 27 years of age.

It is two of the younger tyros who have laid the foundation for their journey to the decider. Billy Vunipola has been a key figure at the base of the scrum for a number of years, but even the dynamic, bustling number 8 has been upstaged by fellow back-rowers Sam Underhill (23) and Tom Curry (21).

The pair have been superb in Japan, pilfering ball at the breakdown, executing bone-shaking tackles and linking play with the backs.

"There's a lot of McCaw and a lot of Pocock in them, but they’re quicker," former All Black head coach John Mitchell said recently.

The English back row concedes 15kg to their South African counterparts, but a similar performance to that which put paid to New Zealand last time out will have the Springboks facing an uphill task.

The George Ford-Owen Farrell combination appears to have the answers, Elliot Daly is yet to be shown up defensively for all the pre-tournament concerns, while Jonny May will be looking to cap off a fine 2019 with another try.

It may well come down to placed kicks and the pressure will be on George Ford and Handre Pollard to deliver the goods.

An intriguing encounter awaits in Yokohama.

Follow England v South Africa in the Rugby World Cup final (kick-off 9am) this weekend via our live blog on RTE.ie/Sport and the News Now app, or watch live on RTÉ2 from 8am.

Hungry Healy kicking on and ready to answer Munster call