Ireland are flying a specialist lawyer into Japan in a bid to keep Bundee Aki's World Cup alive.

Connacht centre Aki was sent off for a high tackle on UJ Seuteni in Ireland's 47-5 win over Samoa on Saturday, that booked Joe Schmidt's men a World Cup quarter-final.

Ireland expect Aki to face a disciplinary hearing in the next 36 hours, where the 29-year-old could be hit with a suspension that could end his World Cup.

But the Irish Rugby Football Union (IRFU) has confirmed that William Fry partner Derek Hegarty is en route to Japan, to act for the union in any eventual hearing.

"I feel sorry for everyone who gets a red card," said Farrell. "I don't know anyone in world rugby who wants to do anything like that on a pitch.

"We believe there will be a hearing in the next 36 hours, so we'll see how that goes.

"Reaction stuff is very tough to judge, you can slow everything down and everyone has a comment.

"I'd like to think there's a bit of feel in and around the whole situation."

'There were elements of the performance that we're delighted with' - @irishrugby boss Joe Schmidt on #IREvSAM 'Hopeful' that Aki can play next week #RWC2019 #rterugby pic.twitter.com/06UegO6wmL

Ireland boss Schmidt said Aki was "devastated" to have been sent off against his fatherland Samoa in Saturday's seven-try win in Fukuoka.

Samoa head coach Steve Jackson immediately pledged to make any possible representation to World Rugby, in the hope Aki would not receive any further punishment than his red card.

Previous red cards have been met with three-match suspensions at this World Cup however, and Aki might suffer the same fate - which would rule him out of any further action at the tournament.

Former Terenure scrum-half Hegarty heads up the sports division at Dublin firm William Fry, who advised the IRFU on its bid to host World Cup 2023.

Schmidt said he would be "pretty disappointed" if Aki's red card turned into a suspension for him to miss the remainder of the World Cup. 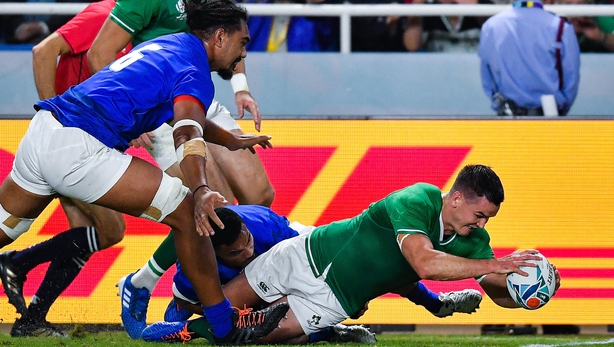 "It's all about moving onto the next round, which we're pretty pleased with, to get a chance to go for a quarter-final," said Farrell.

"We're pretty pleased with how we dealt with and managed the game against Samoa. It was tricky enough conditions.

"I don't think watching on TV at home you'd have been able to tell, but it was very blustery out there and I thought we managed the conditions pretty well.

"It was tough playing against the wind in the second-half, but then we managed to stay in the Samoa 22 for a good while.

"So overall we're very pleased to be sat here with a win."