Johnny Sexton returns to the Ireland team and will captain the side for the first time in Thursday's Rugby World Cup clash with Russia in Kobe.

The Leinster out-half, who was left out of the squad for last Saturday's defeat to Japan, will become the 106th player to captain Ireland at this level.

"It's a massive honour to captain Ireland," said Sexton, who suffered a quad strain in the opening game against Scotland. "It's something I've thought about as a kid. I am 100 percent [fit].

"I've made a lot of decisions around trying to get there someday. I'm incredibly proud."

Head coach Joe Schmidt has made 11 changes for the Pool A encounter with Rob Kearney, Garry Ringrose, Keith Earls and Peter O'Mahony the only players who started against the hosts to retain their places.

Captain Rory Best, Cian Healy, Conor Murray, James Ryan and Josh van der Flier are all rested, while Jordi Murphy, who replaced the injured Jack Conan in the squad, comes straight into the starting team having arrived on Sunday and "trained unbelievably well".

Joey Carbery will cover the scrum-half position from the bench. 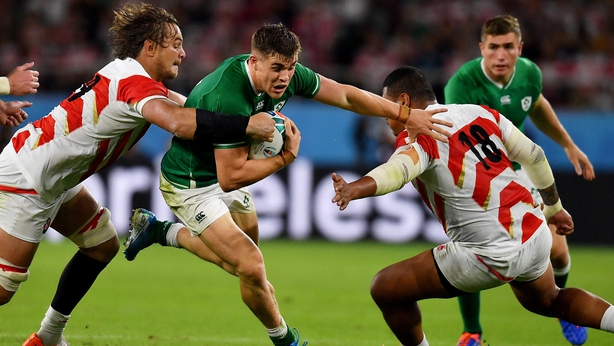 Asked about playing centre Ringrose for the third successive match, Schmidt said: "It's a risk but Garry is feeling great, and he’s playing super.

"I thought Garry was really good last weekend, he was one of the guys who didn’t really miss a beat.

"He moved into 12, we had Jordan Larmour at 13, who's really a back-three player for us, we had Luke McGrath on the wing and we were chasing the game, and that’s a fairly tough situation to be in.

"Robbie Henshaw (hamstring) is on the cusp of being available but that's a risk we don't feel we need to take because Bundee is back.

Earlier, Russia named a team containing nine changes to the side beaten 34-9 by Samoa.

Vasily Artemyev will once again captain the team from full-back.