Scotland have suffered a fresh blow to their World Cup hopes after flanker Hamish Watson was ruled out for the rest of the tournament.

The Edinburgh forward suffered a serious knee injury during Sunday's 27-3 defeat to Ireland in their Pool A opener in Yokohama and will play no further part.

Gregor Townsend has now turned to Watson's clubmate Magnus Bradbury for cover after a scan confirmed the news the 27-year-old had been fearing.

Watson was heard letting out a huge scream just before half-time as he was caught in a painful ruck tangle with Cian Healy and Tadhg Furlong.

He was taken from the field on a stretcher and was later spotting looking disconsolate on the bench with his brace round his left leg.

No timescale has yet been put on his recovery period but his World Cup is now over.

Bradbury, who had already travelled to Japan on stand-by as a precautionary measure after fellow Edinburgh back-rower Jamie Ritchie suffered a facial injury in the Dark Blues' final warm-up test, will now join Townsend's team officially as they gear up for their do-or-die clash with Samoa next Monday.

The loss to Ireland was a bitter blow to Townsend's plans for the tournament and he admits losing Watson is another painful set-back.

The head coach said: "While there is a high probability of picking up injuries during a World Cup, it's always disappointing to see someone having to head home.

"We feel for Hamish who had worked so hard for this opportunity and wish him well in his recovery." 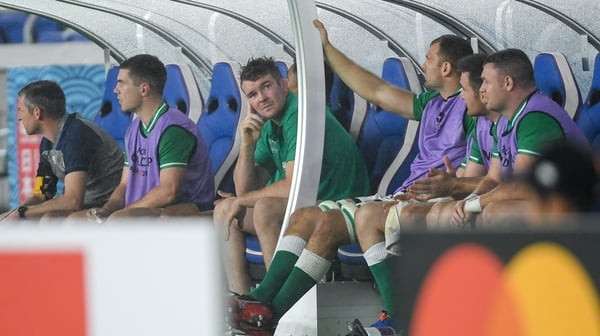