Ireland have beaten Italy 16-9 in their Rugby World Cup Pool D clash at London’s Olympic Stadium, ensuring their qualification for the quarter-finals of the competition.

However, the match-winning difference was a first-half try from Keith Earls - which made him Ireland’s all-time top World Cup tryscorer with eight – and a Sexton conversion.

But this was a game that Ireland far from had their own way, with Italy right in the tie, and looking dangerous, to the very end.

The southern Europeans are eliminated from the competition, while Ireland march on to a pool decider between themselves and France next Sunday, knowing they will need to produce a far better performance to see off Philippe Saint-André’s side at the Millennium Stadium.

A tit for tat opening in east London saw both teams pressure the opposition 22, but Ireland drew first blood as Italy coughed up a penalty more or less in front of the sticks, to give Johnny Sexton an easy opening three points from the hoof.

But Italy responded well to that first piercing of their rearguard, as they went through multiple phases to camp in the Ireland 22, where No 8 Jamie Heaslip was caught with his hands in the ruck; Allan slotted the kick with the minimum of fuss to level the scores.

After a raucous reception as the game kicked-off, the roar in the stadium dimished slightly as some slow scrum sets took the oomph out of the game momentarily.

Ireland put the zest back into the tie just before the end of the first quarter, as Sexton released Robbie Henshaw inside him to smash to the Italian 5, before popping to Earls to cross the whitewash and enter the record books as Ireland’s all-time RWC top tryscorer. Sexton made no mistake with the extras.

Italy displayed patience and willpower to go up the other end, where they drew another infringement at the breakdown. Paul O’Connell was the guilty party this time and Allan didn’t need to be asked twice as he went for the sticks and bisected them.

Sexton had the opportunity to stretch Ireland’s lead on the half hour, but a penalty effort on goal rebounded off the right upright, before Sergio Parisse claimed to carry to safety for the Azzurri.

The Irish were strangely lacklustre for large swathes of the second quarter, failing to gain a major impetus in attack, and with a defensive line speed lacking any real zeal.

Joe Schmidt’s team had plenty of field position to do damage in the ten minutes before the break, but lack of incision from scrum and lineout platforms meant they went into the break with just a four-point cushion and the Azzurri still very much in the tie. And although Ireland expended plenty of energy immediately after the break, they had no immediate reward, as poor retention at the breakdown, scuppered their attacking forays.

It was Italy who had the first try-scoring chance of the second 40, with some wonderful loose passing putting Furno into space in the left corner of the Ireland 22. The towering second row put the head down and steamed towards the line, with Peter O’Mahony coming across to force the Tarzan-haired lock into touch as he reached for the line with the egg in one hand.

Italy got the score their attacking play deserved soon after as they won a penalty wide left, and Allan, having his best ever game in an Italian jersey, stroked over the points to make it a one-point match.

As the clocked ticked towards the end of the third quarter, Ireland finally began to use their forwards to make gainline yardage, with Rory Best and O’Connell smashing the Italian defence with viguour and anger.

Still the Azzurri rearguard held firm though and Ireland had to settle for a Sexton penalty to push them back to four ahead.

It was workmanlike rather than artistic as Ireland kept the pressure on Italy, and forced their continental European oppponents to concede another penalty in the 22, which Sexton jumped at the opportunity to slot between the sticks and put a coverted try between the teams. 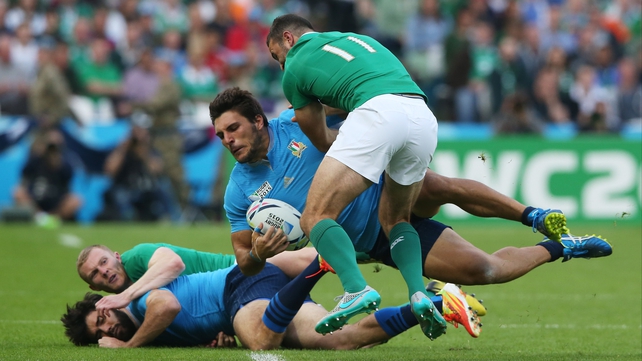 With a just over a quarter to go, Schmidt made his first substitutions with Cian Healy and Nathan White introduced for Jack McGrath and Mike Ross in the pillar positions.

On 65 minutes Italy called Parisse and Allan ashore for Alessandro Zanni and Carlo Canna. Parisse was immense throughout but his lack of match fitness -following a drained haematoma in his calf – meant he was never likely to feature for 80 minutes. Canna had the oportunity to put his name on the scoreboard immediately after his arrival, but he shanked an effort on goal, from just inside halfway.

As the game ticked towards the final ten, Schmidt made more changes, with Chris Henry and Devin Toner coming in for Sean O’Brien and Iain Henderson, as well as Sean Cronin slotting in for Best at hooker a few minutes later.

Ireland were condemned to play the remainder with 14 men as O’Mahony saw yellow for illegally clearing out an Italian player at the breakdown, giving Italy a gilt-edged chance to get more than a losing bonus-point from the tie.

The Italians, from that penalty, kicked for the corner from Canna’s boot, but gave Ireland a huge let off as Davide Giazzon’s throw sailed over the the tail of the ensuing lineout – the third time the Azzurri’s lineout had malfunctioned in this way – and Henry claimed to march the ball away from danger.

But Italy continued to press and Leonardo Sarto scythed into the Ireland 22 on the right flank, only to knock on in the tackle as Ireland scrambled across to defend.

Sexton had the chance to put the game to bed in the final minute, but he pulled his last penalty effort to the left of the sticks. That made for a nervy close to the game as Italy swarmed like a flock of birds, offloading in the loose, seeking  a gap. In the end it didn’t come, and Sexton booted the ball to touch with the clock in the red.

Not a good day for Ireland. An average display, lacking guile. But a victory is always valuable. And with three Ws from three attempts, Ireland will feel they can go on to claim top spot in Pool D next Sunday.

Man of the match: I Henderson. 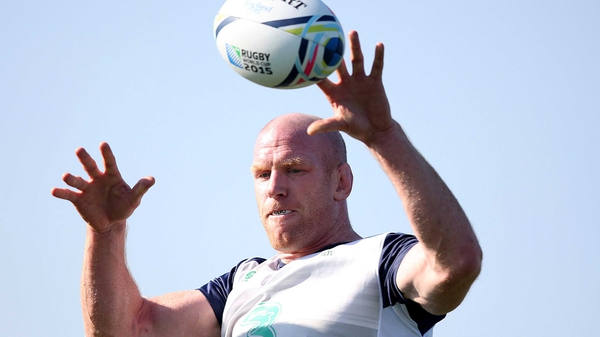