Despite placing in three bumpers for Willie Mullins, the six-year-old changed hands for just £600 in November 2019 and has proved an extremely shrewd acquisition by trainer Shark Hanlon.

Following wins at Grade Three and Listed level, the six-year-old finished fourth in the Mares' Novices’ Hurdle at the Cheltenham Festival last month – and was a 4-1 joint-favourite for her latest big-race assignment.

Skyace travelled strongly on the heels of the leaders for much of the way, but after taking over the lead early in the home straight, she looked at the mercy of the strong-travelling Gauloise between the final two flights.

However, Jody McGarvey’s mount refused to bend and managed to hold off the Mullins-trained runner by half a length.

Hanlon, saddling the first Grade One winner of his career, said: "It's great – she’s as tough as nails.

"She came home from Cheltenham and I said she was better coming out of it than she was before she went.

"I was afraid of the mares that hadn’t ran in Cheltenham more than the ones that had. I just felt she’s in great form, she’s tough and it’s great to have one like her.

"I think it’s great for racing as it shows you can get a small-priced filly and get a syndicate together and go and have fun."

Echoes In Rain scooted to a wide-margin victory in the Paddy Kehoe Suspended Ceilings Novice Hurdle at Fairyhouse.

The Willie Mullins-trained mare was bidding for her second successive victory at Grade Two level following a comprehensive display at Naas last month and could hardly have been more impressive in the hands of Paul Townend.

Anchored at the rear of the field for much of the two-mile journey, the keen-going five-year-old made ground to move onto the heels of the leaders before the home turn.

While her rivals were hard at work, Echoes In Rain was still full of running early in the straight under a motionless Townend – and once given her head, she readily pulled 15 lengths clear.

Mullins, winning the race for a seventh time from the last eight runnings, also saddled the runner-up M C Muldoon.

He said: "She's got plenty of talent, but she just needs to settle. She's settling and learning all the time.

"We didn’t want to bring her to Cheltenham for the Mares’ Hurdle because I thought she might boil over.

"In better races you can settle her in behind a bit more.

"She’s improving all the time, so we’ll go on to Punchestown now."

There was a far tighter finish to the other Grade Two on the card – the Colm Quinn BMW Novice Hurdle.

With 4-5 favourite Gentlemansgame a little disappointing in third, it was left to Jessica Harrington's 10-1 shot Ashdale Bob and 12-1 chance Decimation to fight out a thrilling finish.

No quarter was given by either horse or jockey, but it was Ashdale Bob who edged a neck ahead at the line under Robbie Power.

Townend taken to hospital for a precautionary X-ray on his foot after fall from Egality Mans.

It's an impressive double for Robbie Power and Jessica Harrington as Jungle Junction (10/1) is able to see off the challenge of Brawler to take the Boyle Sports Novice Handicap Chase. #rteracing pic.twitter.com/oFVyfUEJZV

Harrington and Power doubled up with Jungle Junction in the following BoyleSports Novice Handicap Chase, while El Barra (5-4 favourite) had earlier won the Ryan’s Cleaning, Waste And Recycling Maiden Hurdle for the Mullins-Townend combination.

The champion trainer’s assistant, David Casey, said: "The ground was nice for him and he was able to dictate in front

"He ran a bit keen in Leopardstown and disappointed, and probably the same a little bit in Naas.

"We dropped him back to two miles in Navan and he ran well. He’s putting it together.

"I’d imagine he’ll be over fences next season." 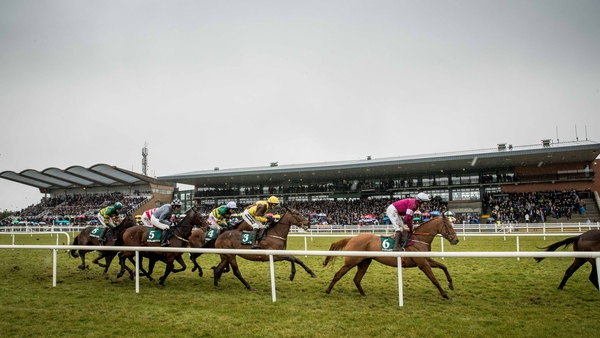