Delta Work made it three wins in three starts over fences as he claimed the Neville Hotels Novice Chase at Leopardstown.

His owner, Gigginstown House Stud, dominated the race with five of the seven runners, but it was Gordon Elliott's charge who emerged the victor.

It looked like turning into an intriguing battle approaching the last as Joseph O'Brien's Mortal was laying down a stern challenge.

However, he made a mistake while Delta Work flew it for Davy Russell and the race was over as a contest.

The 8-15 favourite pulled eight lengths clear to land his second Grade One of the season, with his biggest danger coming when he was almost brought down by the early fall of his stablemate Ben Dundee.

Davy Russell leads Delta Work to victory at the Grade One Novice Steeplechase ahead of Mortal  #Leopardstown pic.twitter.com/1CFkoBiDok

"He was probably lucky as Ben Dundee nearly brought him down early," said Elliott.

"Davy said he's gone very idle and he wasn't doing a whole lot from the second last until after the last when he gave him a thump.

"He said the ground is as quick as he wanted it. He was just a bit careful early.

"He's a lovely horse. I put a hood on him and he's actually gone very relaxed now which is great, I'm going to leave it on him.

"He’s taken very well to fences…he was a little scatty over the first couple, but he has a brain" – Winning jockey Davy Russell praises the performance of Delta Work #Leopardstown pic.twitter.com/xTfimSEsWb

"I'd imagine he'll come back here (for the Dublin Racing Festival), that looks the obvious route for him.

"It's nice to get another Grade One and we're very happy.

"It's probably a good thing that he's settled now, to be getting three miles. He's a good horse, he was a 150-rated hurdler and he loves a battle as well.

"I'd imagine he'll go down the RSA Chase road." 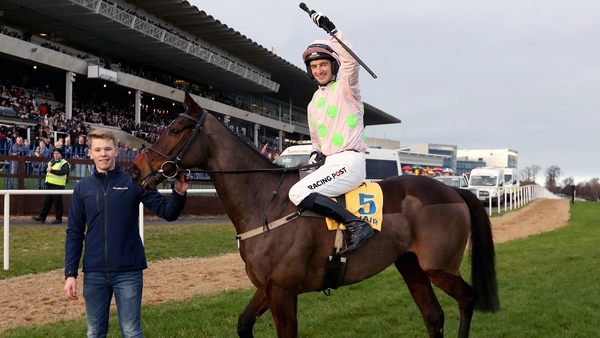