Cracksman lived up to the hype with a stunning display in the Qipco Champion Stakes at Ascot.

Plenty was written and said about connections deciding to skip the Prix de l'Arc de Triomphe and shunning a clash with John Gosden-trained stablemate Enable, who eventually won in great style.

And while the decision to drop back to 10 furlongs did not look sure to suit the son of Frankel, he absolutely blitzed a classy field.

Frankel won the race himself in 2010, but even he did not win by seven lengths, as the 13-8 favourite stamped his authority on the contest from some way out in the hands of Frankie Dettori.

Taking up the running just before the home straight, Dettori knew there were no stamina issues and he poured it on, with Poet's Word and Aidan O'Brien's Highland Reel giving game chase.

The outcome meant that O'Brien was not able to break Bobby Frankel's record of 25 top-level victories in a single campaign. Early the Ballydoyle maestro equalled the record after Hydrangea dug deep to claim the Filiies & Mares Stakes at Ascot.

Truthfully, they were not in the same league on the day, although third-placed Highland Reel's effort in conditions he would not have appreciated can be marked up, given Ryan Moore took the longer route under the trees searching for better ground.

The race was all about Cracksman, though, and he is already 4-1 with Paddy Power for next year's Arc.
Gosden said: "He's a very talented horse, Frankie rode him positively and beautifully in the straight. We said to come wide and he has done it well. You can see why I didn't want him to run (in the Arc) - I don't know, him and Enable would be fun. There's not much between them, is there?

"It's great for Frankel to have a Group One winner in Europe, he's got that wonderful Japanese filly but he's had a proper Group One here in a race he won himself." 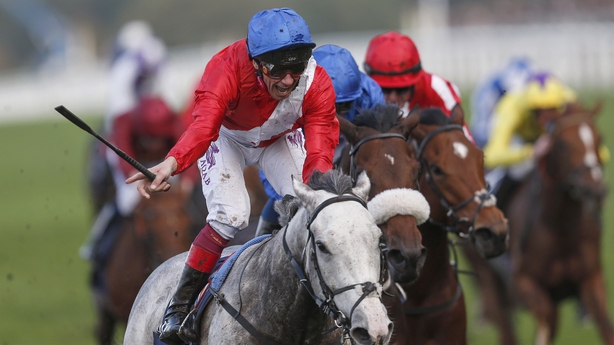 Earlier Frankie Dettori was on the scoresheet when Persuasive ran out an impressive winner of the Queen Elizabeth II Stakes.

Without a prior win this season, the four-year-old filly was sent off an 8-1 chance to beat the boys and quickened up smartly to win in style.

Ribchester, the leading miler in Europe this season, tried to control the race with two furlongs to run, but was there to be shot at in the closing stages.

When Dettori got in the clear on John Gosden's grey she found a change of gear that Ribchester could not live with, eventually scoring by an eased-down length. Churchill was third for Aidan O'Brien, while Nathra, a stablemate of the winner, was fourth.

Gosden said: "He was saving and saving, trying to keep her together. He went for a run on the inside and got blocked, so had to take her back and swing out. She'd have been an unlucky loser.

"When she got out she flew down the middle of the track and Nathra ran a blinder in fourth, they are both off to stud now to be mothers but they've gone out in proper style."

Dettori, who performed his trademark flying dismount in the winner's enclosure, said: "She travelled so well, the ground is so key to her.

"She has an exceptional turn of foot and put the race to bed very quickly.

"This very race was my first Group One in 1990 (with Markofdistinction)."