Enable capped a memorable season with a scintillating display in the Qatar Prix de l'Arc de Triomphe at Chantilly.

John Gosden's brilliant filly lined up as the hot favourite for Europe's premier middle-distance contest after four consecutive victories at the top-level in the Epsom Oaks, the Irish Oaks, the King George VI And Queen Elizabeth Stakes and the Yorkshire Oaks.

The three-year-old made a fast start from stall two and Frankie Dettori always had her well positioned in behind Aidan O'Brien's pair of Idaho and Order Of St George.

The popular Italian gave Enable her head racing inside the final two furlongs and she quickly stamped her class, quickening clear in stunning fashion to seal a dominant success.

Dettori, winning the Arc for an unprecedented fifth time, said: "I was very confident all week... she is a tremendous filly."

"She's very special and she was well positioned by Frankie in order to show her sheer class and brilliance.

What made the performance all the more staggering was how keen Enable was for much of the mile-and-a-half journey. Dettori had his mount in the perfect place throughout, but she refused to settle.

However, the daughter of Nathaniel still had more than enough in the tank to leave her toiling rivals trailing in her wake in the straight.

It was a second Arc success for Gosden following the victory of Golden Horn two years ago.

Cloth Of Stars filled the runner-up spot, two and a half lengths away, with Sir Michael Stoute's Coral-Eclipse and Juddmonte International hero Ulysses another length and a quarter back in third.

Order Of St George, third behind stablemate Found 12 months ago, fared best of the Ballydoyle camp this time around in fourth.

Gosden said: "She's very special and she was well positioned by Frankie in order to show her sheer class and brilliance.

"It's all about the filly and the owner-breeder Prince Khalid (Abdullah). He bred the mother and for his farm to produce something like this is exciting for us all.

"If she's in great form we should consider next year. Maybe it would be wonderful to go to the opening of the new Longchamp and try to do it again." 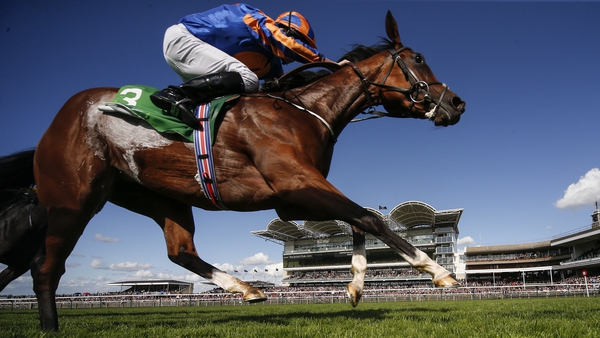