Clemmie took a giant step to emulating the exploits of her full-brother Churchill with a resounding success in the Juddmonte Cheveley Park Stakes at Newmarket.

Churchill won both English and Irish 2000 Guineas this year and Clemmie was made market leader at 3-1 for the Qipco 1000 Guineas and joint favourite at around 10-1 for the Investec Oaks after she opened her Group One account in style.

The Aidan O'Brien-trained filly has progressed throughout the season and after wins at Group Three and Group Two level on her last two starts, took the step up with little fuss and could now head for the Breeders' Cup Juvenile Fillies' Turf.

Treasuring took the field along with Different League and Madeline close up, but Clemmie made her bid two furlongs out and was vying for the lead.

Different League looked a big danger, but she could find no extra in the final 100 yards as Clemmie (15-8 favourite) pulled away in the hands of Ryan Moore to score by a length and three-quarters.

Madeline was a further length and a half away in third place.

O'Brien said: "I'm delighted with her, she's a sister to Churchill so we have always thought the world of her.

"She's a lot like Churchill, she's right in his mould. She's got a great mind, plenty of speed, stays well and nothing fazes her so she's a filly to look forward to."

"She wants further but it's her class that gets her through over six furlongs. She's been progressing with every run and coming along lovely at home and to show that kind of class over six furlongs, you would have to be over the moon.

"She's a lot like Churchill, she's right in his mould. She's got a great mind, plenty of speed, stays well and nothing fazes her so she's a filly to look forward to.

"The lads will discuss what they want to do, but she would have no problem going to the Breeders' Cup - a mile on nice ground would be right up her street."

"It was a messy enough sort of race, but she always had herself in the right position, she was very comfortable and always felt in control.

"Hopefully there's more to come. It's been a while since she ran here in the summer, she's improved from every start and I'd say she'll continue to do so.

"She's not stopping in her races and is giving me every indication she'll go further."

Different League's trainer Matthieu Palussiere said: "We are delighted with her. She keeps putting up great performances. You would imagine she will keep improving with her physique.

"She was beaten by a filly that is improving. You would have to think about taking the winner on again. She has a great temperament. It nearly is as good as Ascot (when she won the Albany). Her run in Prix Morny was good as well.

"I would say that it is for the year. I would say she will have a prep race before the Guineas."

Third-placed Madeline could join Clemmie at Del Mar in November.

Her trainer Roger Varian said: "She is an honest, talented filly but she didn't quite have the guns to win. She ran a good race and she has run well all year.

"She didn't come down the hill like the first two, but when she met the rising ground she stayed on.

"We will see how she is, but we might consider the Juvenile Fillies' Turf at Del Mar.

"The way she has stayed on, she would get a flat American two-turn mile and she will be better on faster ground." 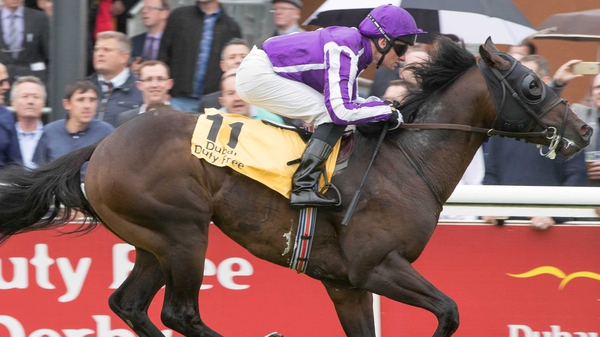 US Navy Flag strikes a blow for O'Brien at Newmarket