Qipco 2000 Guineas winner Galileo Gold is to miss the Investec Derby and instead be aimed at the Tattersalls-sponsored Irish Guineas at the Curragh on 22 May.

Various discussions and pedigree tests have taken place regarding plans for the Hugo Palmer-trained son of Paco Boy, who shone on the Rowley Mile under Frankie Dettori last weekend.

Palmer told his Betfair blog: "Nobody who witnessed the speed and power of Galileo Gold winning the 2000 Guineas will be surprised to learn that the result of his Equinome tests - from the scientists at University College Dublin - is what they call a 'CC'.

"This means that there is a less than one per cent chance of his optimum trip being a mile and a half and therefore, having consulted with Harry Herbert and Sheikh Joaan [of Al Shaqab Racing], I can reveal that the horse will not be running in the Derby.

"In many ways this is a relief, as if the results had come back a 'CT' then we may have faced a dilemma.

"Our priority is now to cement his position as a superstar miler and, all being well, we will now run in the Irish 2,000 Guineas, and hopefully then on to the St James' Palace Stakes at Royal Ascot.

"I can honestly say that I have never had a horse take a race so well as he has his Newmarket run.

"He has literally lost no weight, hasn't left an oat, and looks a trillion dollars."

The victory was a landmark achievement for Palmer in claiming a first British Classic winner, and one he feels has helped calm any early-season nerves.

He said: "I've been absolutely blown away by the support and the messages of congratulations, I still have over 150 messages that I've got to get back to but I will get through them all.

"It is extremely exciting and hugely important for the yard when it has grown so significantly. It has settled a lot of nerves and no one can say in this early part of the season the yard can't take the growth it has had.

"For me and my team it is magic to have such a lovely group of horses at the end of the day." 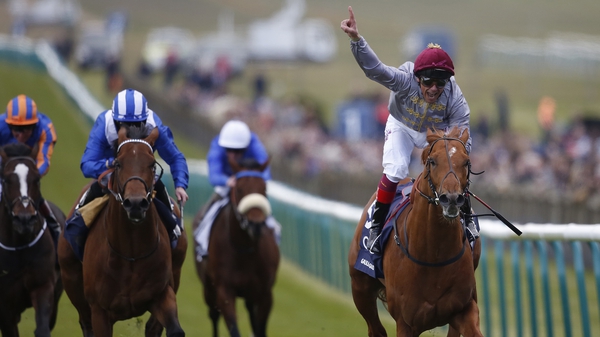