Free Eagle was all out to repel the late thrust of The Grey Gatsby in a pulsating Prince of Wales's Stakes at Royal Ascot.

Despite having been off the track since finishing third in the Champion Stakes in October, Free Eagle was the 5-2 favourite for Dermot Weld and Pat Smullen kept things simple, positioning the market leader close to the pace and out of trouble.

As the pacesetting French raider Gailo Chop began to fade from the home turn, Free Eagle was sent to the lead and quickened smartly to take a couple of lengths out of the field.

Kevin Ryan's The Grey Gatsby, a 9-2 shot under Jamie Spencer, spent much of the race in behind horses and was crying out for a gap in the last quarter-mile.

When he did finally get into the clear, he found top gear and was making ground all the way to the line, but went down by a short head.

Western Hymn was back in third, with The Corsican coming home well in fourth.

Smullen said: "I've never enjoyed a winner like it. I've been saying for so long how good I think this horse is and we've had a stop-start campaign with him, but he's shown today how good a horse he is.

"I've never enjoyed a winner like it" - Pat Smullen

"They didn't go over-fast but I committed soon enough and all credit to him, he kept going all the way to the line even though The Grey Gatsby came at me.

"I can't tell you how good a training performance this is, it hasn't been easy at all, he's done wonders with this horse to get him here today.

"I didn't think he'd be able to show his best today, but he did. I think this horse will improve for a mile and a half, but you could see his speed the way he quickened up today."

Weld said: "He got a brilliant ride, he's a very good horse. When you've got a good horse it makes the training easy, but it hasn't been easy with him.

"He got a heavy head cold a few weeks ago and I thought today was very much in doubt, but we got him right on the day that mattered.

"Fitness on the day was my main concern, as I said - I had him as fit as I could get him with the limited preparation he had. He sticks his neck out and he battles.

"The Irish Champion Stakes will be on the agenda and I've always thought the Arc would be the race for him."

Ryan said of The Grey Gatsby: "In the first two furlongs I thought they were going to go a good pace but then they half pulled it up and he got locked up.

"In fairness, Jamie gave him a fantastic ride, it was a great horse race and he's back to his best.

"I knew we had him in great shape, he's got a long run with a lot of races coming up now, I was quietly confident he'd put up a big show.

"Fair dos to the winner, it was a great training performance but I'm not disappointed, I know the horse is back to his best and we can look forward."

"He's proved today what we've said about him all along. He's in the Eclipse and he's in the King George over a mile and a half.

"We'll let the dust settle and see how the horse comes home. I'll speak to Jamie and Ryan (Moore) as well, I'm sure he'll have an opinion." 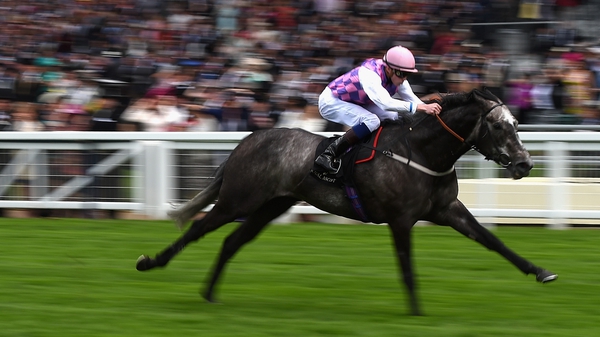