Amazing Maria caused a major upset in the Duke of Cambridge Stakes at Royal Ascot.

Formerly trained by Ed Dunlop before joining David O'Meara at the start of this season, the four-year-old grey had run well in defeat in an Ascot handicap and at the Curragh in May, but was 25-1 for what looked an even tougher task.

With Euro Charline refusing to enter the stalls, Rizeena, bidding for her third Royal success following previous victories in the Queen Mary and Coronation Stakes, was the first of the supposed big guns to commit for home.

Integral, who was odds-on to win the Group Two prize for the second successive year, went in pursuit inside the final two furlongs but eventually weakened tamely.

Amazing Maria was dropped out last early on by James Doyle, but came home powerfully to beat Rizeena by two lengths.
Cladocera was best of the rest in third.

Doyle said: "I feel bad for Danny Tudhope (injured regular rider) first of all, he should be riding her.

"I've been lucky to get a few nice rides for David in the past and even though they might be a big price you should never discount them.

"It was a funny race, we went a slow pace early and then dashed in the last two furlongs. I thought the ground might be a bit quick but she quickened up well."

Doyle went on: "She was fancied for the Guineas last year so has always had talent but I couldn't say I fancied her. David just told me to get her to relax and enjoy it.

"It's important having winners here, it's our showpiece meeting."
O'Meara said: "We've ended up with a nice filly.

"She came to Ascot on her first run for me but probably hit the front a little soon, we didn't know her that well.

"Then she ran on soft ground, which we thought she'd like, but she's shown today she obviously wants it faster.

"James gave her a lovely ride, it was always the plan to produce her late and he settled her lovely.

"Last year was special (Buckingham Palace with Louis The Pious), this is only our second winner so it's equally special." 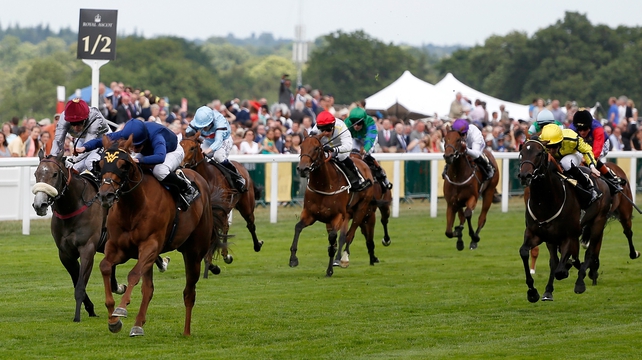 The giant Wesley Ward-trained filly was heavily supported as the 5-2 favourite for the five-furlong Group Two and broke smartly in the hands of Ryan Moore.

While stable companion Bruised Orange blazed a trail on the other side of the track, Acapulco led the group racing towards the stands side and quickened up from two furlongs out to leave her rivals toiling.

Easton Angel ran a blinder to fill the runner-up spot and was easily best of those racing away from the market leader, but was still beaten readily by a length and a half.

Another leading fancy in Besharah finished third to give the form an extremely solid look.

Ward said: "She's a sweetheart, what a lovely filly, she really proved herself today. We went over all the horses at the sale and I pointed out to Mr Tabor which ones I liked and thankfully we got the right one.

"It's a huge relief to get a winner at the meeting, it's just amazing."

"I hope to inspire more Americans to come over and have a go as we've some really fast two-year-olds that come out early.

"It's such a privilege and hopefully we'll see some of the bigger trainers with better pedigrees come over.

"I was very disappointed with her first run and I did something very unconventional, I let her breeze seven days afterwards but it was the most phenomenal breeze on grass I've ever seen and thanks go to Keeneland for allowing me to do that.

"I'll talk with the owners and see what they wish to do, but she has a big future on turf." 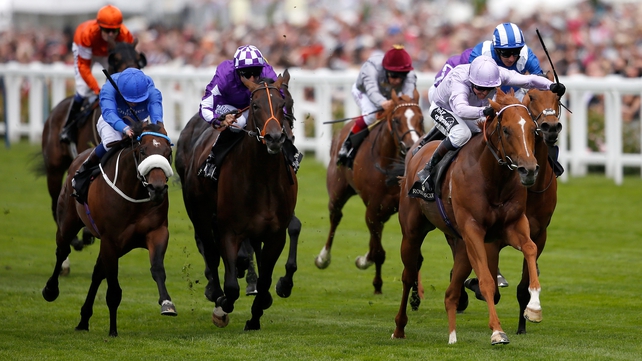 The three-year-old was a 14-1 shot having finished seventh in the 2000 Guineas and was never too far off the pace from when the stalls opened.

Dutch Connection quickened to lead inside the final furlong and although Fadhayyil was gaining at the finish, the Hills runner had enough in the tank to hold his father Barry's horse at bay by half a length, with Bossy Guest back in third.

Ivawood was the hot favourite for the seven-furlong Group Three having finished third behind Tuesday's St James's Palace winner Gleneagles in both the 2000 Guineas at Newmarket and the Irish equivalent at the Curragh, but after being bumped, he weakened rapidly and was ultimately a big disappointment.

Richard Hannon, trainer of Ivawood said: "He ran no sort of race, he had hard races in both Guineas and maybe that is why. It's disappointing, but there are plenty of good days still left in him." 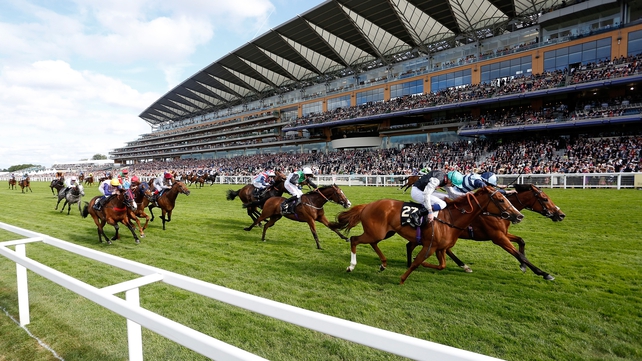 The John Gosden-trained Gm Hopkins swooped fast and late to land the Royal Hunt Cup under an inspired Ryan Moore.

Moore buried the 8-1 shot in the middle of the pack before asking his mount to go about his business inside the final furlong.

Almost simultaneously Temptress was produced with her challenge on the far rail and the two thrust towards the line together, but Gm Hopkins passed the post a neck to the good.

Chil The Kite ran a fine race in third, with Balty Boys easily faring best of those that raced towards the stands side in fourth.

Spark Plug was still in with a place chance when dramatically stumbling and rolling over with half a furlong to run under Jimmy Fortune, but thankfully both horse and jockey got to their feet.

Moore said: "It was very wild where we were, there wasn't an awful lot of pace.

"My horse travelled very well but I had to go a little sooner than I would have liked, but Frankie (Dettori, on favourite Ayaar) was stopping in front of me.

"Luckily enough I was on the right side, but you can't do much about that." 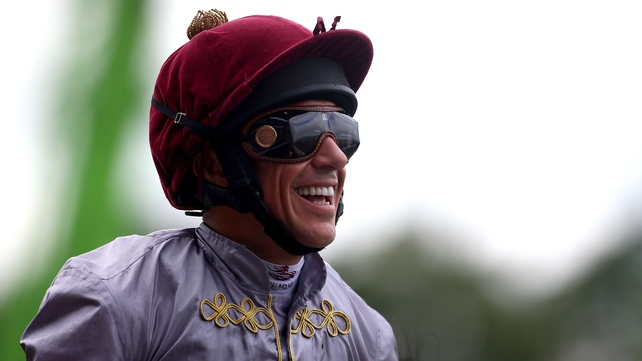 Frankie Dettori claimed his 50th winner at Royal Ascot as Osaila got up late in the Sandringham Handicap.

The popular Italian settled Richard Hannon's well supported 13-2 chance in the middle of the pack for much of the straight mile journey and she was still on the bridle entering the last two furlongs.

Dettori tried to weave a passage between the pacesetting Sulaalaat and 2-1 favourite Always Smile soon after, but the door was swiftly shut in his face as the latter started to edge left.

Always Smile still looked likely to deliver at that stage, but her waywardness got progressively worse in the final furlong, giving Osaila a chance and they flashed by the post almost as one.

After a brief wait, the judge called Osaila the winner by a nose from the market leader, who surely would have won had she charted a straight course. 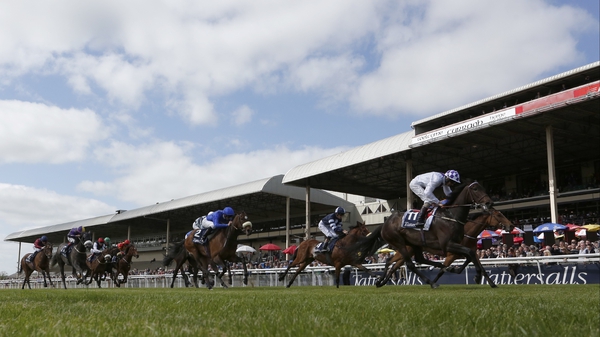 Ribblesdale Stakes at Ascot trip 'within compass' for Pleascach