Gleneagles was hailed by Aidan O'Brien as "an exceptional horse" after the colt brilliantly vindicated 4-1 favouritism in the Qipco 2000 Guineas at Newmarket on Saturday, forming part of a magical weekend for Ryan Moore.

The son of Galileo had long been the first choice in the race for the all-conquering Ballydoyle team and it was easy to see why he was held in such high regard.

Although French raider Territories tried to come with a late thrust, Gleneagles had far too much in reserve, with Moore punching his mount all the way to the line to score by two and a quarter lengths.

O'Brien, claiming a record-breaking seventh Guineas success, said: "We always thought he'd be a miler as he has a lot of speed.

"He is an exceptional horse and it will be hard to see a horse having a better pedigree than him.

"We will think about the Irish Guineas and the St James's Palace Stakes route with him."

Second Step and Telescope could cross swords again at Royal Ascot after fighting out a thrilling finish to the Dunaden at Overbury Jockey Club Stakes at Newmarket.

Goldream, meanwhile, took the step up to Group Three company in style as he landed the Pearl Bloodstock Palace House Stakes.

Trainer Robert Cowell said: "He will go for the Temple Stakes at Haydock next. Providing he runs well there he'll go for the King's Stand."

Best Of Times (9-4 favourite) staked his Classic claims with an impressive success in the Listed Harbour Watch Newmarket Stakes.

It got even better for the Coolmore operation on Sunday as Moore powered home Legatissimo to 1000 Guineas glory in the same Michael Tabor colours.

In doing so, Moore became the first rider since Kieren Fallon in 2005 to land the big-race double on Guineas weekend.

Last at halfway, Moore bided his time waiting for the right moment to make his move, but it was a fine line as the favourite Lucida went for home.

Jim Bolger's Lucida shot clear and looked to have put the race to bed, but Legatissimo was really beginning to lengthen.

With Moore in full flow, David Wachman's filly showed the benefit of her stamina, having won over an extended nine furlongs just a week ago.

Lucida tried in vain to battle back but went down by three-quarters of a length.

Meanwhile,O'Brien's Diamondsandrubies is among a field of 12 for the Arkle Finance LTD Cheshire Oaks at Chester on Wednesday.

The Fastnet Rock filly is out of Quarter Moon, who won a Moyglare as well as finishing second in the Irish 1000 Guineas and both the English and Irish Oaks.

A winner at Tipperary first time out this season, she was third in what looked a strong Listed race won by Bocca Baciata at Navan.

Andrew Balding's Victoria Pollard won nicely at Newbury on her racecourse debut recently and steps up in class. The Sir Percy filly hails from the family of useful stayer Victoria Montoya.

Daniel Kubler runs the unbeaten Affileo, who is two from two on the all-weather, while Clive Cox reintroduces Loaves And Fishes, a good winner at Haydock on her only outing last season.

Michael Bell runs Banzari, a 10-length winner at Nottingham last term while John Gosden is represented by Zamoura and Entertainment.

Later on the card O'Brien runs the interesting Sir Isaac Newton in the Homeserve Maiden Stakes over an extended mile and a quarter.

The Galileo colt cost 3.6 million guineas and is a brother to Oaks runner up Secret Gesture.

He had one run at two, when second to Dermot Weld's Zawraq. 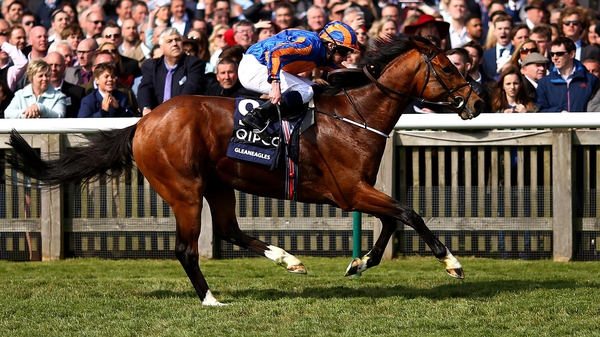