Gleneagles gave Aidan O'Brien his seventh Qipco 2000 Guineas success as he ran out a convincing winner of the first Classic of the season at Newmarket.

Sent off the 4-1 favourite for the mile event, Ryan Moore's mount was very much in control heading into the dip and kept on to win by two and a quarter lengths.

The Andre Fabre-trained Territories was second, with Ivawood a further three-quarters of a length back in third.

"Obviously we will think about the Irish 2000 Guineas." - Aidan O'Brien

Despite changes to the stalls and rails this year, the field still split into two with Kool Kompany leading down the centre of the track and Home Of The Brave heading the charge up the near side.

Moore settled in behind on that side early on, tracking the fancied Intilaaq, and produced his mount with a furlong still to run, while Ivawood was desperately trying to assert down the middle of the track.

However, Gleneagles had far too much in reserve and held the charge of the staying-on French raider Territories in second.

O'Brien said: "He was always a good traveller. When he gets there he doesn't do much, but that was him last year as well. His form was top class and he only does what he has to do. We always thought he would be a miler."

Moore added: "He's very straightforward. I think he's probably a miler. I'm looking forward to him for the rest of the year. He's a very exciting horse. Aidan's record speaks for itself. He's achieved everything you can."

O'Brien is now mapping out a plan for Gleneagles, saying: "Obviously we will think about the Irish 2000 Guineas and the St James's Palace Stakes route with him. We will look to keep him at a mile."

Ivawood's trainer Richard Hannon said: "The winner is obviously a very good horse, but he (Ivawood) was in front on his side and we'll either go to Ireland or Royal Ascot.

"Kool Kompany will probably go for the Jersey, Estidhkaar didn't run his race for whatever reason and Moheet was very unlucky in places." 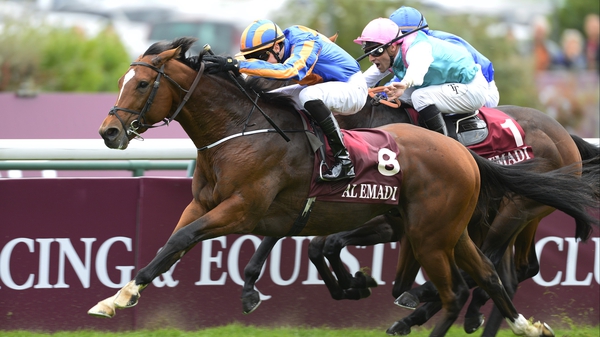