The Jonjo O'Neill-trained runner outstayed his rivals at Prestbury Park to land the blue riband for McCoy's employer JP McManus but his next run in the Grand National resulted in tragedy as he fell early in the race and suffered a fatal injury when running loose.

McCoy told told BBC Radio 5 Live: "The mother of Synchronised, Mayasta, was my first winner for JP in 1996 and Synchronised gave me the greatest day in racing. JP spent his whole life trying to buy a Gold Cup horse, and his wife bred one for him.

"He was a bit like I am as a human being. He probably wasn't the greatest horse I'd ridden, but he had the greatest will to win.

"As a jump jockey I've seen the human side of horse racing be really tough, but in equine terms what happened to Synchronised (suffered a fatal injury in the 2012 Grand National) was the worst day I've had in racing.

"When he fell I can distinctly remember him galloping off. I remember being in pain but thinking at least the horse is all right.

"Afterwards when he was loose he managed to get injured. I was very sore, but I cried for days afterwards. That affected me more than any other horse. It's personal and that's why he's number one."

"He was a bit like I am as a human being. He probably wasn't the greatest horse I'd ridden, but he had the greatest will to win.

McCoy placed Don't Push It, who finally ended his National hoodoo in 2010, as his second favourite horse while triple Gold Cup hero Best Mate, who the rider partnered to King George VI Chase glory, was third.

The Paul Nicholls-trained duo Big Buck's and Master Minded were partnered by McCoy on a handful of occasions but they both featured on his top 10 along with Well Chief, Baracouda, Cyfor Malta and Like A Butterfly.

The list also featured Gloria Victis, winner of the 1999 Feltham Chase and the 2000 Racing Post Chase for Martin Pipe.

The novice subsequently tackled the Gold Cup at Cheltenham but he had to be put down after breaking a leg two fences from home - an incident that still weighs on McCoy's mind.

"We had a decision to make whether to run in the Sun Alliance Chase or the Cheltenham Gold Cup," he said. "He had been working extremely well. I agreed with the decision to run him in the Gold Cup. He was after beating seasoned chasers. Sadly he got fatally injured. If he hadn't got injured, I think he would have won.

"That's one of the toughest things about the sport when you see a horse like that with so much potential - horses you dream about.

"It's a tough thing to take. I didn't ride after that at Cheltenham that year. I can remember that night after the Gold Cup crying because I thought he was a superstar. You find it very hard to get over.

"I still think about Gloria Victis now and it's 15 years since I rode him." 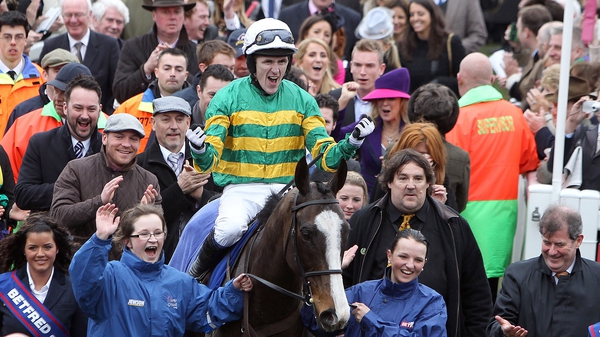