There was a controversial prelude to the Group One feature as Epsom Oaks third Volume, trained in Newmarket by Italian Luca Cumani, had to be re-plated after being found to be wearing shoes on her hind legs that are banned from racing in Ireland.

The unfortunate incident led to a number of fillies, notably Tapestry, playing up in the parade ring before the race eventually got under way around 20 minutes later than scheduled.

For much of the journey it appeared Volume not having to endure the same pre-race build-up could be a crucial factor as she bowled along at the head of affairs in the hands of Kevin Manning.

The pack closed up rounding the home turn, but only Ribblesdale Stakes winner Bracelet (10-1) under Colm O'Donoghue and Tapestry, the choice of the trainer's son, Joseph, were able to reel in the Cumani runner.

To her credit, Volume dug deep, but was unable to resist the Ballydoyle pair close home and it was Bracelet who held off Tapestry by a neck.

O'Brien also saddled the fourth home Beyond Brilliance, ridden by his daughter Ana, who was becoming the first female in history to ride in the race.

The disappointment was Dermot Weld's 7-4 favourite Tarfasha, who had filled the runner-up spot ahead of Volume at Epsom but could manage only fifth this time.

The winning trainer, securing his fourth Irish Oaks triumph, said: "I'm delighted for everyone. It's great for Colm. He's just got beat in this race a few times and he's also been beat in the Derby a few times. He gave her a marvellous ride and he's a world-class rider.

"This filly (Bracelet) has an incredible pedigree by Montjeu.

"She ran a great race in Ascot. I knew Joseph (O'Brien) was going to ride Tapestry if the ground was good and he was true to his word.

"Tapestry ran a great race, but she got a bit upset beforehand and circumstances conspired against her.

"We knew Dermot and Luca's fillies were the ones everyone had to beat. They were the two form horses and we knew Luca's filly would probably make the running, so the race worked out well for us.

"Beyond Brilliance did the same in Killarney. We weren't sure if she would get the trip, but Ana said she would and it was a great run.

"It's a very important race for us. It's seriously important for the fillies."

O'Donoghue, securing his first Irish Classic victory following several near-misses, said: "She came into the race with a very good profile having won the Ribblesdale. They went a hard pace throughout and she ground it out well.

"She's quite calm at home. She came here on top of her form. She's bred to win the race and she's done it."

Cumani was keen to defend himself after the race and was delighted with the performance of his filly.

He said: "As far as I'm concerned it wasn't a controversy because it's never been one in England.

"For horses that can knock themselves behind, we have what are called trailers on their hind shoes which helps them keep their hind feet apart and stops them knocking their hind legs.

"We've done this in England many times, we've done it round the world many times and it never entered our calculations that it may not be allowed here.

"As it wasn't allowed, fine. Rules are rules. We took those off and she ran well.

"It took a bit of time and I apologise for the delay we caused, but in all honesty we just didn't know this would be a problem.

"Those shoes have helped her in the past, so we just did what was best for the filly.

"I got a little bit hopeful about a furlong out, but two fillies quickened up past her. She was trying to come back at the end, so all credit to her.

"I think the Yorkshire Oaks will come into the reckoning now." 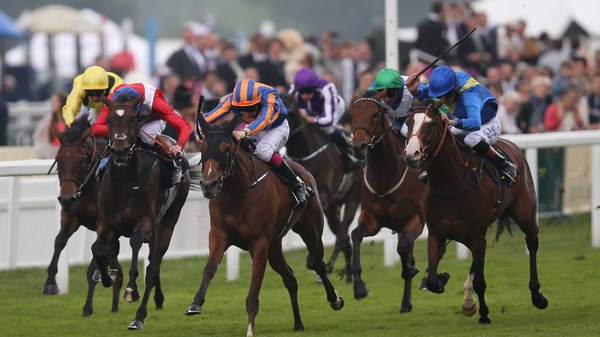