Bracelet could head for the Darley Irish Oaks after sparkling for trainer Aidan O'Brien in the Ribblesdale Stakes at Royal Ascot.

The filly had not raced since running poorly in the Qipco 1000 Guineas but her handler's patience was duly rewarded with a notable success.

O'Brien decided to discount the Irish equivalent as well as the Investec Oaks to give her more time and it paid off as she bounced back to form when stepped up to a mile and a half.

Fitted with a hood on the track for the first time, Bracelet (10-1) looked a class act as she powered to victory by half a length from Lustrous after O'Brien's other runner Terrific had made the running.

Criteria was just a head away in third, with French-trained favourite Vazira staying on for fourth.

O'Brien, recording his first success of the week, said: "After the Guineas we could have gone for the Irish Guineas and then the Epsom Oaks, but we decided to give her more time and Ryan (Moore) said after Newmarket that a mile and a quarter and a mile and a half would suit her well.

"Some of the horses have been running in and out. They were all under the weather in the spring. Some came back well and some didn't, yet everything seemed right.

"Joseph (O'Brien) rode her work and felt she was happy in the hood.

"I suppose we'll have to look at the Irish Oaks now."

Frankie Dettori gave his first flying dismount for some time to celebrate his 49th Royal Ascot success with a vintage display on Baitha Alga (8-1) in the Norfolk Stakes.

The winner's three previous races had all been over six furlongs but trainer Richard Hannon had no qualms dropping him down to the minimum trip after owners Al Shaqab Racing had their colours carried to victory in the Coventry Stakes by John Quinn's The Wow Signal.

The distance proved no object as Baitha Alga showed a terrific turn of foot to seal victory in a matter of strides and win by a length and a half under a jubilant Dettori.

"I'd been saving the flying dismount for Treve, but sadly that didn't happen," said Dettori.

"He ran a super race at Epsom (to win the Woodcote), the team were very pleased and I'm so pleased he got the job done.
"He's a dream to ride."

Hannon said: "He's a very special two-year-old. He was having his third run in three weeks. I appreciate that's quite a lot, but he's only been cantering at home.

"He's one of the best two-year-olds I've seen this year. We'll have a chat and see where we go from here, but he'd have to go up to the Prix Morny, something like that. If it was soft ground there I don't think he'd mind that."

That race could also be under consideration for The Wow Signal.
Harry Herbert, racing manager for Al Shaqab, said: "We'll get the dust settle and see where we go. The Morny must be an option. We've got plenty of options." 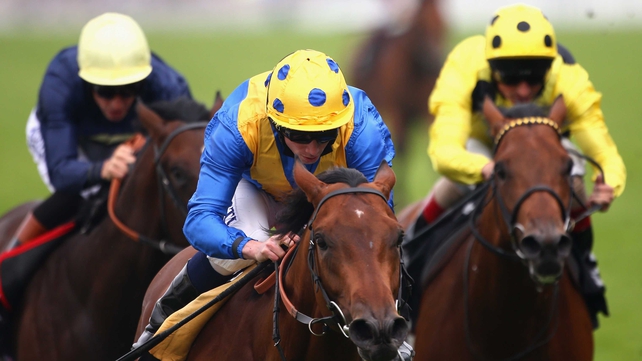 Cannock Chase (7-4 favourite) continued his climb up the ladder when justifying sustained support in the Tercentenary Stakes.

The Sir Michael Stoute-trained colt had looked the part when winning at Windsor and Newbury earlier this season and took the step up to Group Three class in his stride.

Ridden with supreme confidence by Ryan Moore, Cannock Chase made eyecatching progress from the rear and was soon in front in the straight as he won by a length and a half from Mutakayyef, although the jockey got a two-day ban (4 and 6 July) for careless riding.

Stoute said: "We put him in the King Edward as well, he'll get a mile and a half but this was always first choice. I'll just keep him off fast summer ground I think, I don't want to do that at this stage.

"I think he'll be a Group One horse in time."

A crack at the Ladbrokes St Leger is in the offing for Elite Army after his taking success in the King George V Handicap.

Saeed bin Suroor's Authorized colt was sent off the 4-1 joint-favourite following victory at Sandown last month and was nicely positioned from the start by six-times champion jockey Kieren Fallon, travelling sweetly on the heels of the leaders.

Windshear was heavily backed into a share of favouritism having chased home Cannock Chase on his latest appearance, a horse who won the Tercentenary Stakes earlier in the afternoon, and he was the first of the pair to commit for home.

Richard Hughes briefly looked to have stolen the initiative aboard Windshear, but Fallon drove Elite Army into top gear in the final furlong and he swept by close home to score by a decisive three-quarters of a length.

Andrew Balding's Born In Bombay edged ahead to clinch a typically wide-open renewal of the Britannia Stakes.

With 30 runners assembled for the fiercely competitive handicap over the straight mile, the huge field split into two groups, with 14-1 shot Born In Bombay always positioned close to the pace in towards the stands rail in the hands of David Probert.

The three-year-old struck the front two furlongs down and found enough for pressure late in the day to hold the fast-finishing Bow Creek at bay by half a length.

The stands side proved the place to be, with Hors De Combat and favourite Bilimbi also racing in that pack and they finished third and fourth respectively. 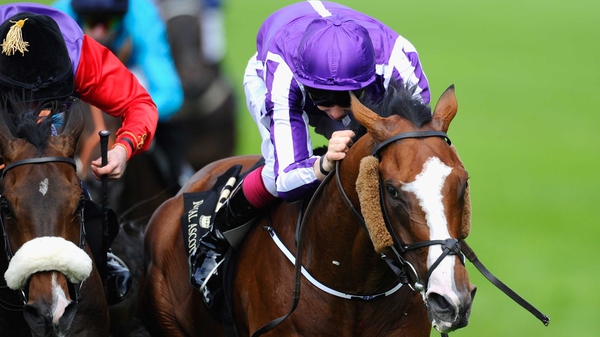