The fifth round of action proved to be another fruitful one for the Irish contingent in the AFL Women's with a trio of players grabbing goals across the weekend.

Aileen Gilroy scored a goal and a behind as the Mayo footballer and Galway's Aine McDonagh helped Hawthorn pip Sydney Swans 35-31 in Friday's clash at the Swinburne Centre.

It was a first ever AFLW win for the club in their inaugural season.

Speaking to Hawks' media afterwards about the victory and her goal, Gilroy said, "It was so good to get the win, just absolutely delighted with everyone, the way we pulled together and got the win in the end."

Vikki Wall scored her fourth goal since joining North Melbourne on Friday as the Meath All-Ireland winner helped the Kangaroos to a 43-28 win against Western Bulldogs , with her team-mate Cork's Erika O'Shea also making six disposals.

That takes her tally to six goals for the season and sixth in the overall charts after five rounds of action. Team-mates Orlagh Lally (Meath) and Amy Mulholland (Armagh) also contributed to the Dockers win, while Aisling McCarthy of Tipperary stood out for the Eagles with 17 disposals, a behind and five tackles.

An entertaining chat with Aileen Gilroy after last night's win, thanks to @WISE_Employment 👇 pic.twitter.com/yYouKS04V9

Elsewhere on Friday, Mayo's Sarah Rowe had eight disposals as Collingwood earned a 28-17 win over an Essendon side containing Joanne Doonan and Megan Ryan of Fermanagh and Tipperary respectively.

Dublin's Sinead Goldrick and Blaithin Mackin of Armagh both featured for Melbourne in a comfortable 50-8 win over Carlton with the latter adding a behind.

Orla O'Dwyer was unable to continue her goalscoring heroics this week for Brisbane Lions but contributed five disposals and six tackles in a narrow 18-14 defeat to Richmond which still keeps her side top of the AFLW standings.

Down's Clara Fitzpatrick had seven disposals for St Kilda in a heavy 71-21 defeat to Geelong Cats on Thursday.

In the final fixture of the round on Sunday, Cora Staunton and Brid Stack combined for 17 disposals and seven tackles but saw their Greater Western Sydney Giants slip to a chastening 97-1 loss against Adelaide Crows who go level on points with Brisbane at the top of the table on 16 points. 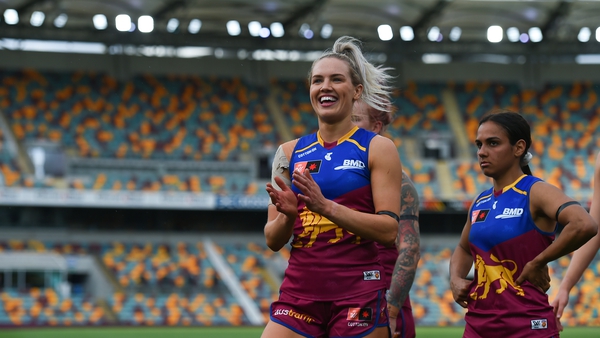