Rhys McClenaghan and Adam Steele have joined Emma Slevin in qualifying for their respective finals at the 2021 European Gymnastics Championships in Basel, Switzerland.

McClenaghan, 2018 European champion and 2019 world bronze medallist on pommel, secured his place in the pommel horse top-eight final, qualifying in first position with a score of 14.766.

The Newtownards man, who has his eyes firmly fixed on Tokyo 2021, will compete in the final on Saturday from 1pm (Irish time) with the final being aired live on RTÉ One. 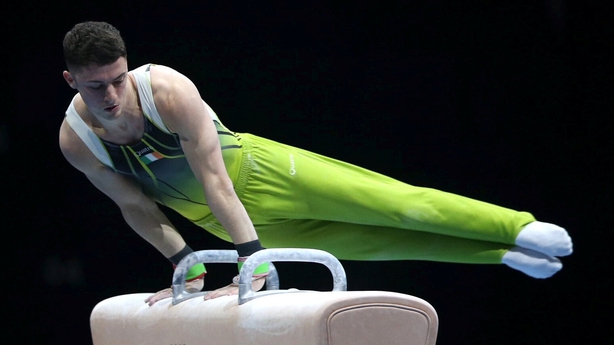 Following on from Slevin on Wednesday, Steele had an excellent competition competing on all six of the men's apparatus and finished in 20th position with a score of 79.731.

In doing so he makes history by securing Ireland’s first place in a senior men’s all-around top 24 European final.

The all-around final will take place on Friday at 4pm on RTÉ Player.

This will be after the women’s all-around top-24 final on RTÉ2 from 12.15pm, which will feature rising Irish women’s star Slevin.

Britain's Max Whitlock made a disappointing return to international action as he failed to qualify for the pommel final.

The reigning Olympic and world champion was competing for the first time since regaining the latter title in Stuttgart in 2019.

Whitlock fell during his routine and scored 12.766, putting him in 43rd place, well outside the top eight places required for qualification.