Munster and Leinster's respective Pro14 games have been rescheduled as Storm Emma has also claimed next Monday and Tuesday's EA Sports Cup first round matches.

Munster's game in Edinburgh will be played on Friday, 16 March,at 7.35pm.

Leinster's trip to the Scarlets, scheduled for Saturday, will now be played next Friday, 9 March, also at 7.35pm.

The FAI have confirmed that the EA Sports Cup first round matches due to be played next Monday and Tuesday have been rescheduled for later in the month.

Thursday morning, the IRFU confirmed that this weekend's entire Ulster Bank League schedule has fallen foul of the snow. All 25 matches will be refixed by the union shortly.

Friday's Pro14 clash between Cardiff and Benetton has also been cancelled.

The clash of Ulster and Glasgow Warriors had already fallen victim to the cold snap. The Round 17 fixture will now be played on the weekend of 20-22 April.

Connacht are in South Africa to face the Cheetahs on the same day, a safe distance from Storm Emma and 'The Beast from the East'.

On Wednesday the decision was taken to postpone all 10 of the weekend's SSE Airtricity League games.

RTÉ were set to broadcast Cork City v Bohemians on Friday night, while Derry City were due to make their return to the Brandywell against Dundalk.

The FAI said in a statement: "Following a detailed monitoring process, where the FAI worked closely with all clubs, it was decided to postpone all games in the Premier and First Divisions due to current severe weather conditions and future forecasts from Met Eireann."

The five Premier Division games have been rescheduled for Monday 19 March.

Details for the refixed EA Sports Cup games are below. 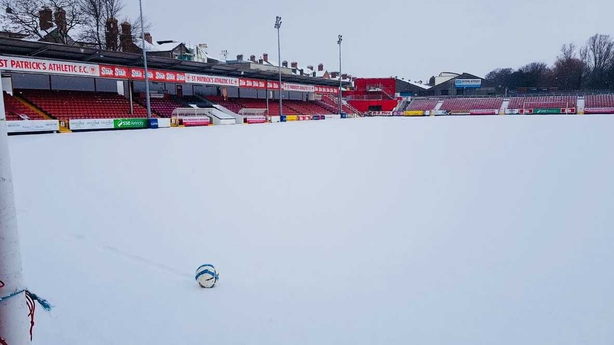 The GAA has confirmed that all Allianz Football and Hurling League fixtures scheduled for this weekend have been postponed.

Full rescheduling details will be confirmed later but the association has confirmed the following:

The Irish Athletic Boxing Association (IABA) have advised that National Novice finals will not go ahead on Friday.

The finals will be re-scheduled to a suitable date.