The Philadelphia Eagles' playoff ambitions suffered a near-fatal blow with a surprise 27-24 loss to Washington on Saturday.

By contrast, the San Diego Chargers kept their postseason hopes alive in dramatic fashion when they rallied from a 21-point halftime deficit to beat the San Francisco 49ers in the second game of the day.

Nick Novak kicked the winning field goal from 40 yards in a 38-35 overtime victory.

In Maryland, a 26-yard field goal from Kai Forbath with five seconds left condemned the Eagles to a third successive loss and leaves them needing the Dallas Cowboys to lose their last two games if they are to have a chance of winning the NFC East.

The crucial moment came after Eagles quarterback Mark Sanchez threw an interception with 91 seconds remaining with Redskins cornerback Bashaud Breeland diving in front of Jeremy Maclin to make the pick.

The Redskins scored on the resulting possession and although a poor kickoff handed the Eagles one last chance, Sanchez's 'Hail Mary' pass into the end zone was knocked down by David Amerson and Washington ended their six-game losing streak.

The result also meant the Detroit Lions (10-4) clinched their first playoff berth since 2011.

It was a cruel end to an otherwise impressive display from former New York Jet Sanchez.

The quarterback completed 37-of-50 passes, throwing for a career high 374 yards and two touchdowns but as well as the interception, he also gave up a fumble that resulted in a field goal early in the first quarter.

The Eagles led 14-10 at halftime after an 11-yard touchdown run from LeSean McCoy and a three-yard pass from Sanchez to Riley Cooper.

Sanchez found Cooper again, with the receiver producing a brilliant high catch at full stretch, in the fourth quarter before a field goal from Cody Parkey levelled the game at 24-24 before the Breeland interception.

In Santa Clara, California, the 49ers looked set to eliminate the Chargers from the playoff hunt when quarterback Colin Kaepernick completed an astonishing 90-yard touchdown run late in the third, the second longest by a QB in NFL history.

The Chargers were down by 14 points after three quarters but Rivers responded magnificently, throwing two touchdown passes, the second an 11-yard effort to Malcolm Floyd with just 29 seconds left to send the game to overtime.

The result does not guarantee San Diego (9-6) a spot in the playoffs, but it gives them a fighting chance.

"I was the main reason we were in that big hole (at half-time), but it's awesome to fight back to win," Rivers said. 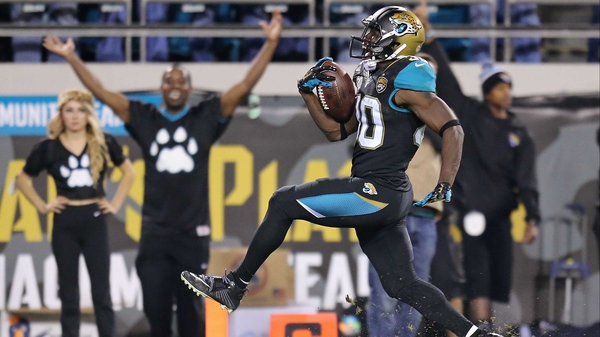