Too many of the London NFL games have ended up as lop-sided affairs and when the unfancied Falcons stormed into a 21-0 half-time lead, it appeared another - albeit a major surprise of one - was on the cards.

But Detroit had other ideas and gave themselves one final drive to win it inside the final two minutes, and win it they did but only after profiting from a late penalty call against them.

Prater missed his first attempt from 48 yards but the Lions had drawn a flag for delaying the game, giving him a second go which he did not pass up.

Drew Brees was in sublime form as New Orleans bounced back from last week's defeat to the Lions by ending the Green Bay Packers' four-match winning streak.

Brees completed 27 of 32 passes for 311 yards and three touchdowns to lift the Saints to an impressive 44-23 victory.

Ben Roethlisberger passed for six scoring passes and covered an astonishing 522 yards as the Pittsburgh Steelers claimed a 51-34 victory over the Indianapolis Colts in a pulsating encounter.

Opposite number Andrew Luck passed for 400 yards and three touchdowns but it proved to be immaterial with the Colts' five game winning streak being brought to a halt in spectacular fashion.

Tom Brady threw for five touchdowns as the New England Patriots swatted aside the Chicago Bears 51-23, with the evergreen Pats quarterback completing 30 of 35 passes.

Russell Wilson's touchdown pass to namesake Luke in the final minute helped Seattle to a tense 13-9 victory over the Carolina Panthers, while the Denver Broncos claimed their fourth consecutive win courtesy of a 35-21 success over the San Diego Chargers.

Andy Dalton's final-minute one-yard sneak lifted the Cincinnati Bengals to a 27-24 win over the Baltimore Ravens and the Miami Dolphins won back-to-back games for the first time this season as they beat the Jacksonville Jaguars 27-13.

The Kansas City Chiefs hammered the St Louis Rams 34-7, the Buffalo Bills eased past the New York Jets 43-23, the Minnesota Vikings needed overtime to squeak past the Tampa Bay Buccaneers 19-13, the Houston Texans defeated the Tennessee Titans 30-16 and the Cleveland Browns ran out 23-13 winners over the Oakland Raiders. 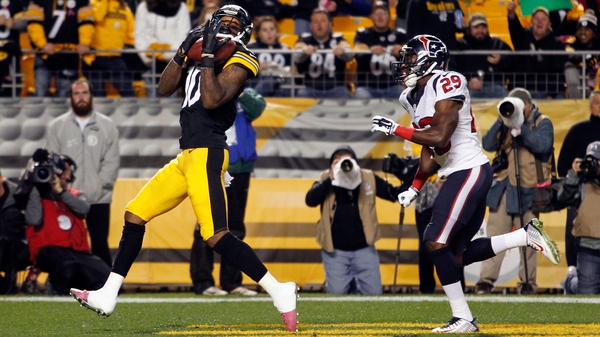