The Winter Olympics in Sochi have officially gotten under way with a lavish opening ceremony designed as a depiction of the history of Russia as seen through the dreams of a young girl.

The ceremony at the Fisht Olympic Stadium signaled the official start of the Games in the south-west coastal resort, which have cost Russia €36billion to stage.

Organisers labelled the opening ceremony, which focuses on both the past and future of Russia and has a young girl named Lubov - meaning Love - in the central role, as "the most complex and ambitious technical show ever attempted in Olympic history".

Ireland has sent a five-strong team to the Sochi games. On Thursday, Seamus O'Connor finished 13th in his heat of the slopestyle event.

Entitled ‘Dreams of Russia’, the ceremony started with the Russian alphabet being shown on screens around the stadium, and will also incorporate historical figures, mythological images and Russian dance.

Former world heavyweight champion boxer Nikolai Valuev makes an appearance as a character in one of the segments.

But a number of world leaders were notably not attending, including Barack Obama, David Cameron and Angela Merkel.

One of the Olympic rings appeared to fail to open during an element of the ceremony.

Much of the focus on Friday was on the pre-show performance of controversial pop act t.A.T.u.

The duo, Lena Katina and Julia Volkova, sang a Russian version of their hit single "Not Gonna Get Us", holding hands on the stage and surrounded by Games volunteers.

The single, which reached number seven in the UK charts in 2003, lyrically depicted the pair as teenage runaways-in-love.

t.A.T.u.'s image appears to directly contradict Russia's hard-line laws on "non-traditional" sexuality, which are widely seen as an attack on gay rights.

Meanwhile, Turkey scrambled an F-16 fighter jet to accompany a passenger plane arriving in Istanbul from Ukraine after a bomb threat was made by a passenger demanding to go to Sochi, Turkish officials said.

"A Pegasus Airlines plane flying from Kharkov to Sabiha Gokcen landed at Sabiha Gokcen safely after receiving a bomb threat while in the air," the Turkish civil aviation authority said in a statement.

An official from Turkey's transport ministry said there were 110 passengers on board and confirmed that a bomb threat had been made but said the plane had landed safely. 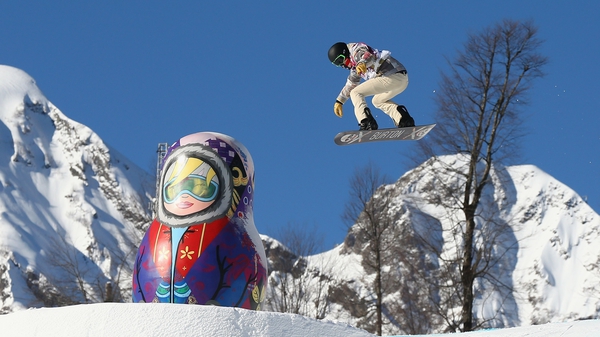