The red-hot San Francisco 49ers beat the NFC South champion Carolina Panthers in a bruising battle on Sunday to make the NFC Championship game for the third year in a row.

The victory, the eighth in a row for the 49ers, sends San Francisco to top-seeded Seattle, their NFC West rivals, for the title game next Sunday with the winner advancing to the Super Bowl.

The wild card 49ers overcame a 10-6 deficit in the hard-hitting contest with a one-yard touchdown pass from quarterback Colin Kaepernick to tight end Vernon Davis 14 seconds before intermission for a 13-10 lead.

Davis was initially ruled out of bounds before the on-field call was reversed after a video review.

San Francisco scored again after a 77-yard drive on their first possession of the second half to build a 10-point cushion as Kaepernick ran in from four yards out after setting up the score with a 45-yard strike to Anquan Boldin.

The fierce San Francisco defence kept Carolina out of the end zone four times from the one-yard line in the first half, at the end of two separate drives, with the home-standing Panthers only able to score three points from those TD opportunities.

"It was a great football game," said Niners coach Jim Harbaugh, who steered his team into the Super Bowl last year. "It was a physical struggle. I'm proud of our team for prevailing."

The game was marked by big hits and confrontational jawing between the players. Four times in the first half the 49ers earned first downs on Carolina penalties.

Following the first 30 minutes, San Francisco took charge and shut down the Panthers.

"When you go on the road in a playoff game and beat another good team in their stadium, it makes you feel like a strong, mighty man," said Harbaugh, the first coach in the Super Bowl era to reach the conference finals in his first three seasons.

The victory set up a third meeting this season between the 49ers and Seahawks, who at 13-3 finished one game better than San Francisco in the West. They split two regular season meetings, with the Seahawks crushing the Niners 29-3 in Seattle. 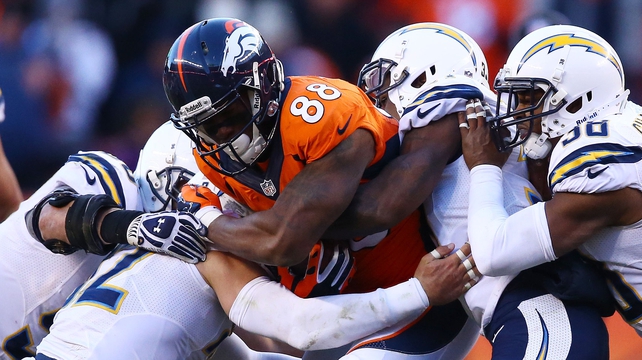 The Denver Broncos survived a fourth-quarter fightback by the San Diego Chargers to claim a 24-17 win on Sunday and advance to the AFC Championship game for the first time in eight years.

The victory sets up a tantalizing showdown between two future Hall of Fame quarterbacks next Sunday when Tom Brady and the New England Patriots visit the Mile High city to take on Peyton Manning and the Broncos with a spot in the Super Bowl on the line.

"It's Broncos versus the Patriots, certainly Tom and I have played a lot but when you get to the AFC championship it's about two good teams that did a lot to get there," said Manning.

"They're a great team, they had a big win last night so we are going to enjoy this one tonight and start to work on them tomorrow and it ought to be a heck of a game."

Manning, who passed for a record 55 touchdowns during a record-smashing regular season, was more clinical than spectacular on a blustery, cool day in Colorado.

He completed 25 passes for a modest 230 yards, including short touchdown strikes to Demaryius Thomas and Wes Welker in the first half.

The red-hot Chargers arrived in Denver riding the momentum from a five-game winning streak and had looked poised to keep their season alive with a fourth quarter rally that cut Denver's 17-point advantage to seven.

But with just under four minutes to play, Manning would not give Philip Rivers and the Chargers another chance, running out the clock with ball control offence to clinch the victory.

"All-in-all I think our defence played one of its better games," said Broncos head coach John Fox. "It's about doing your job, doing it under pressure but we're going to have to play a lot better going forward." 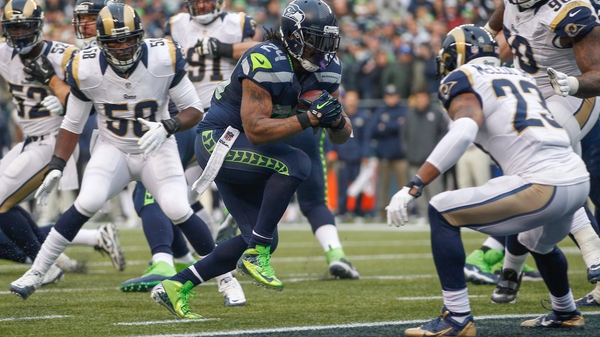